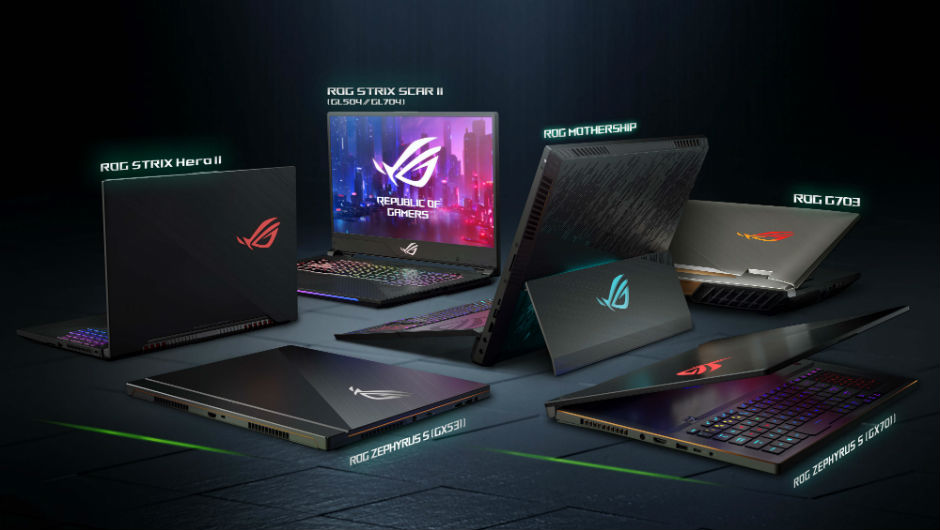 Gaming has never been bigger, and the world’s tech companies are well aware of gamers’ lust for the best hardware to give them the edge in online matches, or make the latest games visually stunning.

And, in recent years, CES has become one of the biggest launchpads for crazy gaming tech. For example, it was CES 2017 that saw Razer launch Project Valerie, a crazy three-screened gaming laptop and at last year’s show NVIDIA debuted a 65-inch, 4K resolution, 120 Hz refresh rate monitor.

CES 2019 has been no different, with a range of gaming devices on show. So, here’s a list of all the latest and greatest gaming tech breaking cover in Las Vegas this year.

Taiwanese company Asus is one of the biggest companies in gaming. At CES this year, it’s announced some pretty wild new toys. 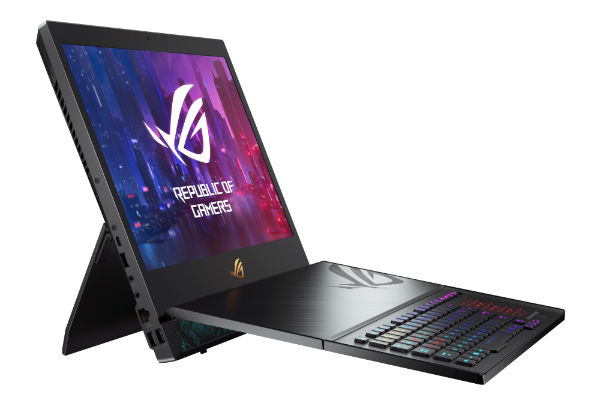 One of the weirdest gaming laptops(?) we’ve seen in a while, the ROG (Republic of Gamers, natch) is like a Microsoft Surface Pro, if it split its time between the gym and esports tournaments.

From a packaging perspective, the Mothership sort of makes sense. It would take some serious hardware to keep the uber-powerful Intel Core i9 and latest-generation NVIDIA GeForce 20-series GPUs cool. So, placing them in screen, rather than below the keyboard, means more air can reach the components.

The Mothership’s other specs are equally impressive: A 17.3-inch Full HD screen with a 144 Hz refresh rate, up to 64GB of Ram and three 512GB solid state drives.

The Mothership will be touching down in Q2 this year, but we don’t know just how expensive it’ll be.

Along with the Mothership, Asus announced a load of more ‘traditional’ gaming laptops.

First up is the updated ROG G703. This refreshed model has an eighth-gen Intel Core i9 and a new NVIDIA 20-series GPU. It also has a 17-inch screen with a 144 Hz refresh rate, plus three solid state drives (SSDs). All this hardware means the G703 is big, weighing nearly 5 kilos and standing at nearly one-and-a-half-feet wide. We’ve had no word on pricing, but it should hit the shelves in the first quarter of 2019. 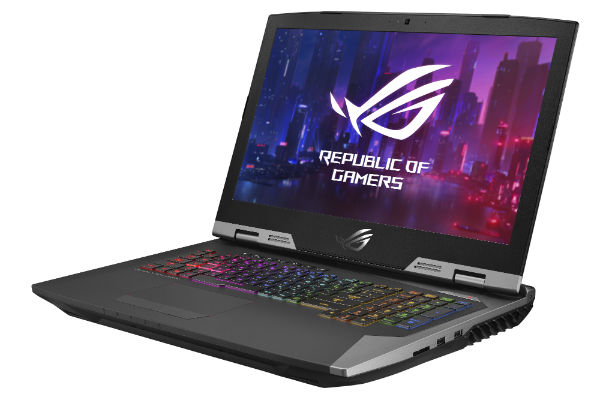 At the other end of the size spectrum is the ROG Zephyrus S GX531. This slender gaming laptop is just over 15mm thick and weighs a smidge over 2 kilos. The GX531 doesn’t go light on the specs, though, with an Intel Core i7-8750H processor and NVIDIA’s new ray-tracing RTX 2080 GPU. The GX531 also has a 15-inch Full HD screen with the speedy 144Hz refresh rate. Again, no word on pricing, but we’d expect this to be well over $1,700 when it goes on sale in Q1. 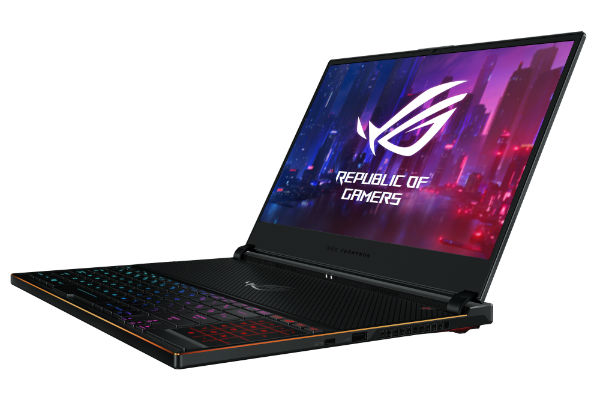 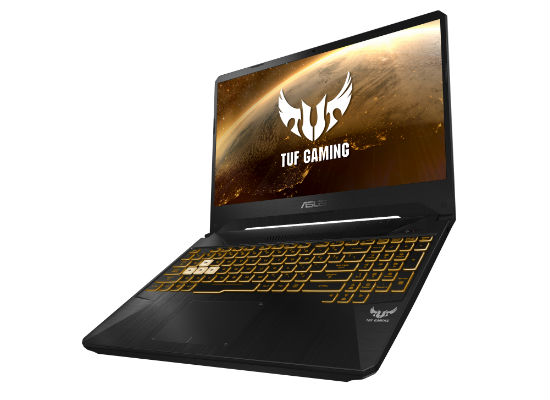 These laptops don’t get NVIDIA’s state of the art ray tracing 20-series GPUs, but are available with AMD’s own RX 560X graphics card, 32GB of Ram and either a 512GB SSD or a 1TB hybrid drive. Both the 15- and 17-inch models get extremely slim bezels with up to 120Hz refresh rates. Again, they’re available in Q1 2019, and will probably be cheaper than the Intel-powered alternatives. 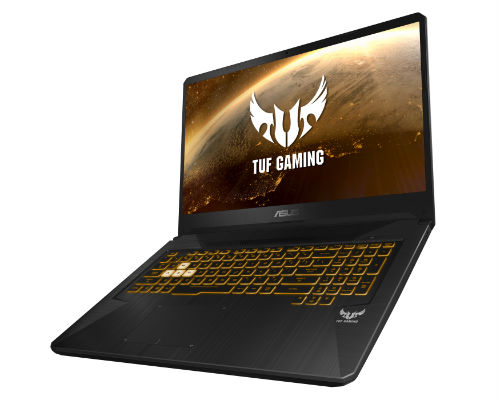 Gaming specialists Razer surprised everyone this year at CES by unveiling its first ever gaming monitor. Called the Razer Raptor, the 27-inch monitor’s design will be familiar to Razer customers, with its focus on tiny bezels, the triple-headed snake logo and array of multicolored LEDs. 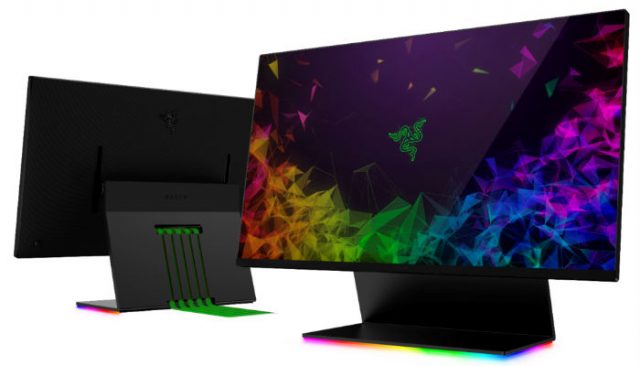 It’s not all show and no go, though. The Raptor has a 2560×1440 resolution, 1 millisecond motion blur reduction and 114Hz refresh rate for seamless gaming. It’ll cost $699.99 when it goes on sale in Canada and the US later this year.

Razer also updated its popular Blade gaming laptop. The new Blade 15 is now available with NVIDIA’s 20-series GPUs, and you can now get a 4K display. The new 20-series GPU models will start from $2,299.99 when they go on sale January 29 in the US, Canada, France, UK, Germany, and China. 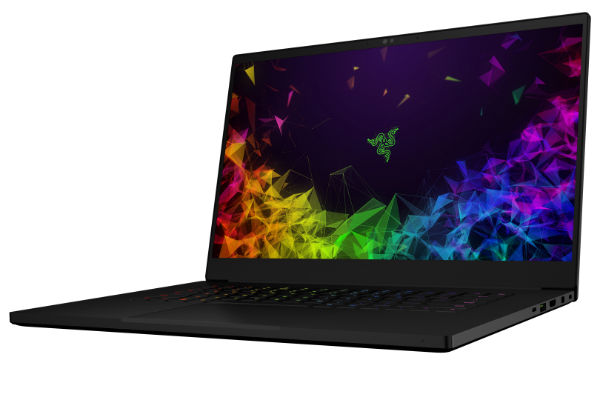 Samsung hasn’t always gone big on gaming, particularly as its PC division stopped selling in some European markets. However, at CES 2019, the South Korean giant sought to put itself back in the minds of gamers with some stunning products.

The Samsung Notebook Odyssey has a ‘Beast Mode’ 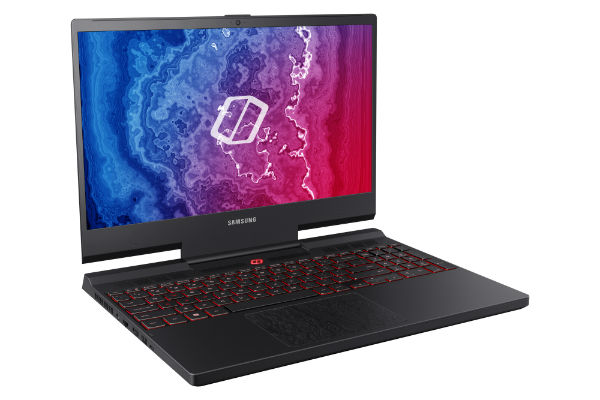 Samsung’s new Notebook Odyssey has all the specs of a high-end 2019 gaming laptop: A 15-inch Full HD display with a fast refresh rate, an eighth-gen Intel Core i7 processor, an NVIDIA GeForce RTX 2080 GPU, 16GB of Ram and room for two 256GB SSD drives.

However, when launching the Odyssey, Samsung also mentioned its new “Beast Mode”. This “lets users modulate [its] performance depending on the software it is running.” A neat trick, but Beast Mode? Really?

Either way, the Odyssey looks set to be a good gaming laptop when it becomes available in early 2019. 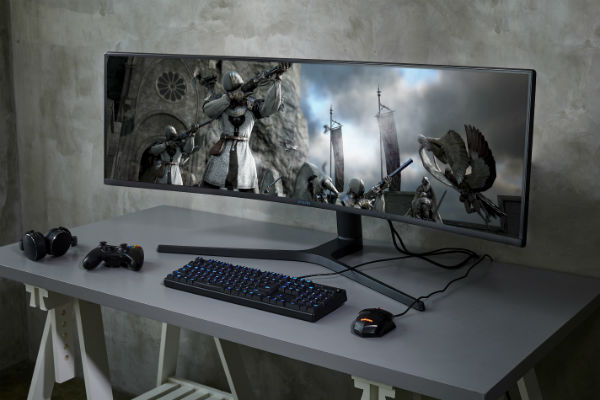 If you prefer to game at a desk, you might be interested in Samsung’s new mammoth 49-inch curved gaming monitor.

This new monitor, called the CRG9, features a 32:9 aspect ratio, a 120Hz refresh rate and a 4 millisecond response time – quite an achievement on a screen of this size. The CRG9 has a 5120×1440 resolution and supports HDR10, for vivid graphics.

We’re not certain when it’ll go on sale, but we’d expect it to cost somewhere north of $1,000.

Lenovo Launches Two Laptops and a Load of Peripherals 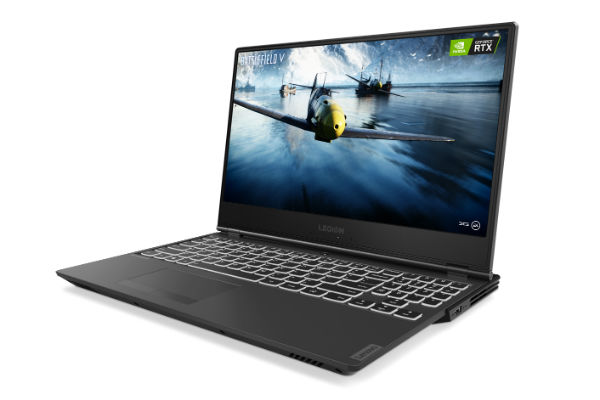 The two laptops, like those from the other brands, feature the NVIDIA 20-series GPUs, eighth-gen Intel Core i7 processors, and Dolby Atmos sound. The Y540 should go on sale in May for $930, while the 17-inch Y740 should cost $1,980 when it hits the shelves in February. 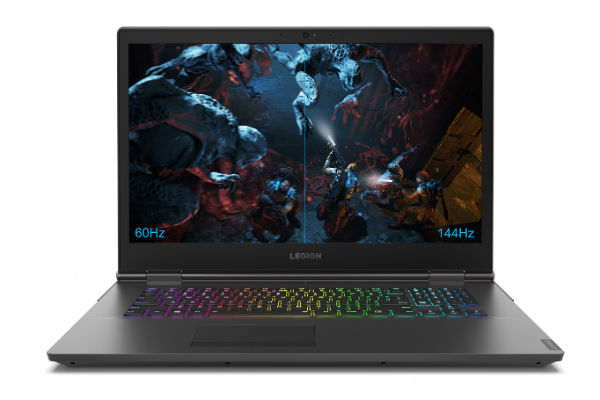 The M500 RGB mouse and K500 RGB mechanical keyboard promise more accurate feedback and responses to make gaming a breeze. They’ll cost $59.99 and $99.99, respectively, when they go on sale in April.

The H300 headset promises to remain comfortable during long gaming sessions thanks to a light and sturdy design, while the H500 offers driverless 7.1 surround sound to give you a more immersive gaming experience. The H300 will cost $59.99 and the H500 will cost $99.99. Both should go on sale in April. 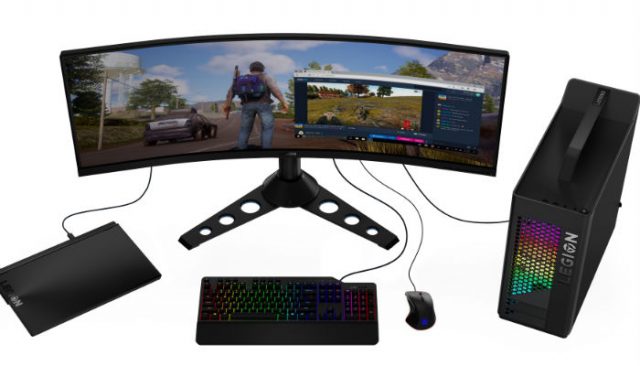 HTC’s phones might be struggling, but its virtual reality department seems to be flying high after it announced two new headsets at CES 2019. These were the Vive Pro Eye and Vive Cosmos. There were also updates to its Viveport subscription service.

The Vive Cosmos is HTC’s attempt to make a more mainstream VR headset. While it only featured briefly during the company’s CES presentation, we do know that it doesn’t require external sensors, and has full motion controllers. There are few details beyond that, but it will work with PCs, plus smartphone compatibility is expected to arrive at some point, too. HTC said that it will offer development kits in “early 2019,” but there are no availability details beyond that. 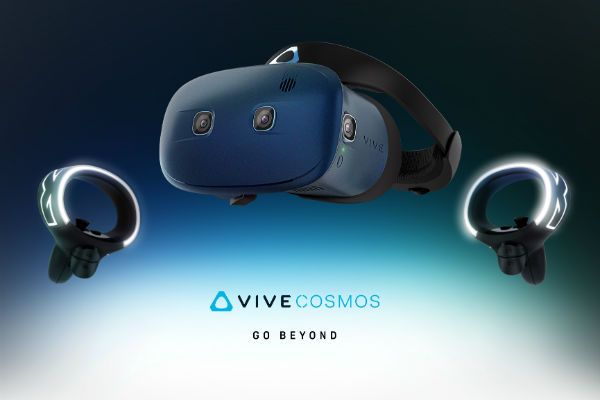 The Vive Pro Eye brings eye-tracking to the current Vive Pro model and, with it opens up a range of new possibilities. Using two sensors in the headset, the Vive Pro Eye is able to track your retinas to see exactly where you’re looking. This, according to HTC, should lead to higher-quality VR experiences thanks to a technology called “foveated rendering.” Essentially, the area you’re directly looking at will be rendered in a higher resolution to the peripheral areas surrounding it – sort of like real life. The current Vive Pro sells for $700, so expect the Vive Pro Eye to be similarly priced, if not more expensive. 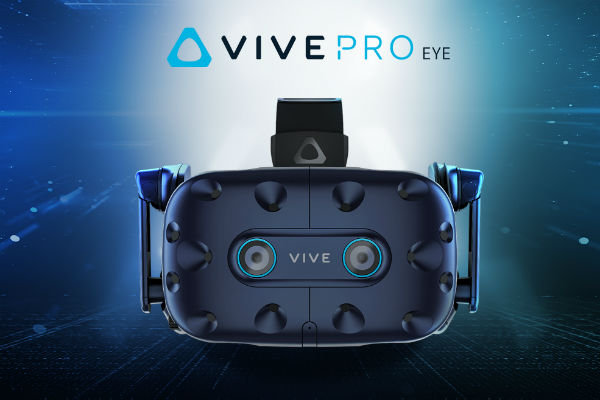 Viveport is the subscription service that gives you access to VR apps, including games and immersive experiences. Previously, users were limited to five choices per month. But, with the announcement of Viveport Infinity, members will be able to download and play any of the 500+ titles with no restriction.

Alongside a load of other tech, LG announced a new short-throw 4K projector. It’s able to stream content from phones and computers and also has USB, Ethernet and HDMI ports for wired connectivity. 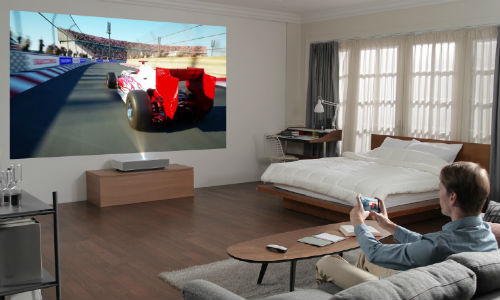 This short-throw makes it easier than ever to own a projector at home, and the 4K resolution should make it a great choice for playing your favorite mobile, console or PC games.