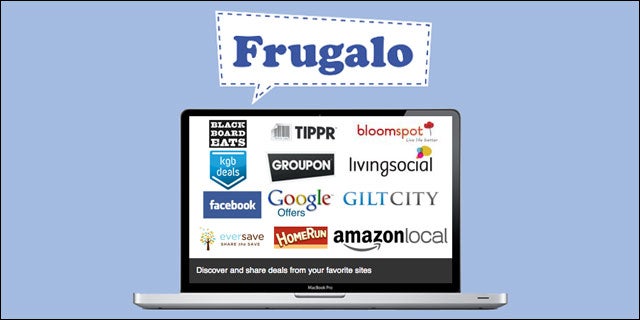 With the loads of daily deals offers out there you probably got a slew of Cyber Monday emails yesterday. I did. I am sure there were lots of great deals but my email inbox got pummeled by the extra deliveries. I could not sort through them all so in many cases I deleted them without thoroughly investigating what I was missing. San Francisco based startup Frugalo launched today looking to help change that.

Frugalo leverages your Facebook graph to offer a social savings network that helps bargain-hunters consolidate deal purchases in one place, while letting them share and discover great new deals with friends. This can help save you time, directing you to one destination when you want to see the latest daily deals rather than going into email. Shoppers can manage all of their purchases, share deals with friends, be alerted when friends make purchases on limited-time offers, and discover deals that are socially curated and align with their past purchase behavior.

Like the popular and handy travel management dashboard Tripit which we have covered previously, Frugalo offers an easy auto-import feature that can search through your Gmail inbox for all your past deals and then pull them into the dashboard. Users can also send deals directly to Frugalo via email or by sharing a link to a purchased deal. Past purchase history will then be shared with your friends to offer them social recommendations of the best deal. Other friends can then see and comment on those deals thus creating a social exchange as users look to determine the best daily deal opportunities out there. The inline commenting on deals can also be used to collaborate on purchases and make plans with your friends.

Frugalo has raised a small round of funding (with the intent to eventually raise more) and is looking to offer the best tools possible for penny-pinchers looking to find the best deals. Competitors to Frugalo might be CityPockets, Coupo.st, Dealery and QDealz among others all looking to secure a bit of the daily deal dashboard and daily deal aftermarket space.

The team of Mike Cieri and Scott Reynolds, both ex-Digg employees, have been developing Frugalo since June, mainly from their apartment dining room, but also for eight weeks at AngelPad, an SF-area accelerator. Frugalo will be a showcased startup at our upcoming San Francisco event tomorrow evening. So be sure to come by and meet the team.