If that sentence doesn’t make sense to you, don’t worry – we’ll explain everything in a minute.

First, though, some facts. The Exodus 1 is expected to ship in December, and while you can pre-order now, HTC is only accepting payments in Bitcoin and Ether. It costs 0.15 or 4.78 of each cryptocurrency, respectively – that’s about $960.

It’s not the final product either. HTC is calling it an “early access version”, and asking for developers to get involved in making it work with loads of different cryptocurrencies. So, is the Exodus 1 a phone from the future? Or is it a bit of a gimmick?

What is a Blockchain Phone?

Essentially, the Exodus 1 is an Android phone that doubles as a cryptocurrency wallet. It’s not the only blockchain phone out there – a company called Sirin Labs beat HTC to the punch with its Finney phone, which is expected to release at the end of November.

Cryptocurrency wallets, if you’re not sure, are basically places where you store the cryptocurrency ‘keys’ which provide access to any funds you’re lucky enough to own. These keys interact with the blockchain which controls your cryptocurrency of choice, allowing you to send and receive funds and monitor your balance.

If you want to get some cryptocurrency, you need a wallet. There are loads of different types, from desktop and mobile apps to browser-based cloud wallets, and even physical wallets which work like USB drives. The Exodus 1 works in a similar way to physical crypto wallets – albeit one that doubles as a phone. 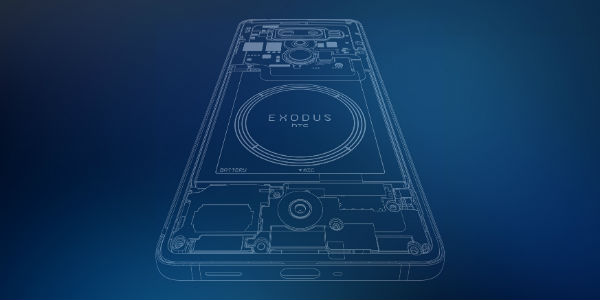 Is the HTC Exodus 1 Secure?

Cryptocurrencies, by their nature, can’t be stolen. Every transaction depends on the public and private security keys, which are controlled by the user in their wallet of choice. And, because blockchains work as online ledgers, tracking every transaction, you can see exactly where any cryptocurrency you own has been sent.

However, cryptocurrency wallets – particularly apps and browser-based wallets – can be hacked, meaning your money could be sent to someone else’s wallet without your knowledge. This is difficult for hackers to achieve, and extremely rare, but has happened in the past.

The Exodus 1, though, because of its similarities to physical wallets, should be less susceptible to hacking. In fact, you won’t even need to worry about any Android vulnerabilities, as the Exodus 1 keeps your crypto keys in a ‘secure enclave’. This is not connected to the operating system, basically keeping your keys and the rest of the phone separate.

But what if you lose your phone?

Thankfully, HTC has thought of that too, with its “Social Key Recovery mechanism.” To set it up, you’ll need to pick a few trustworthy contacts (so not that guy you met in the bar one time, and probably not your technophobic granny, either). They’ll download a key management app, which allows you to regain access to your funds in the event of your phone going walkabout.

Whether this works in practice remains to be seen.

Is the HTC Exodus 1 a Good Phone?

Judging from the specs, the Exodus 1 is stacking up to be a bit of a powerhouse.

It has 6GB of Ram, a sizeable 3,500mAh battery, and uses the Snapdragon 845 processor – the same chip used in the Samsung Galaxy S9.

It should be pretty useful day-to-day as well, with a 6-inch Quad HD+ display, meaning an impressive 3200×1800 resolution, with the now familiar tall-and-skinny 18:9 aspect ratio. The cameras should be impressive too, with dual 16Mp shooters on the rear and dual 8Mp lenses on the front. It’ll also shoot full 4K video at 60 frames per second.

These kind of specs put it in the fight with some pretty impressive Android company, from the latest Google Pixels to the Samsung Note 9. However, the $960 price tag (sorry, 0.15 Bitcoin) means you’ll be paying a premium for its crypto wallet feature.

Should I Buy the HTC Exodus 1?

As we mentioned earlier, the Exodus 1 is currently only available for developers – so at the moment, you can’t buy it.

However, if you’re big into cryptocurrency, the idea of owning a blockchain phone would likely be appealing. And, as crypto becomes a bigger part of our lives and we increasingly manage our lives from our phones, combining the two seems logical.

In short, it might not be such a gimmick after all.