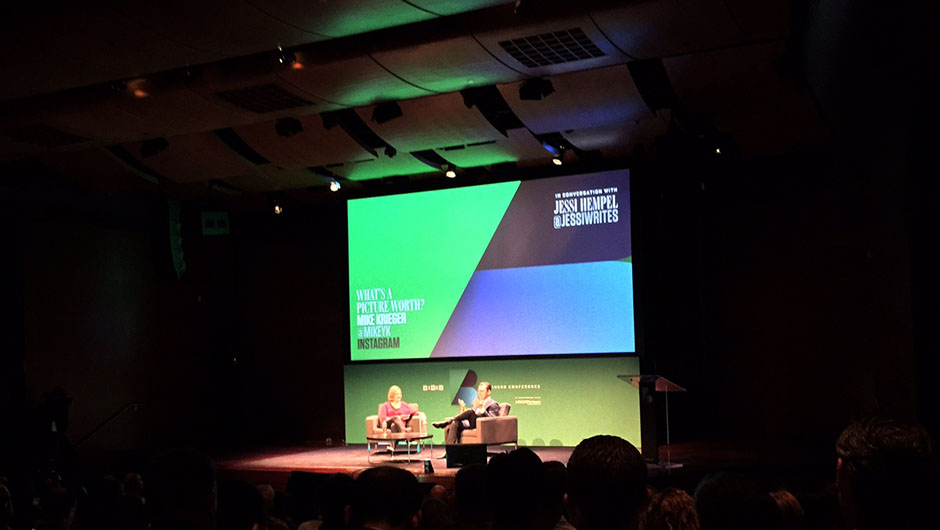 Instagram is easily one of the leading social platforms. And, according to Instagram's Mike Krieger, the reason for its success may be attributed to the company's focus on its community – beginning with Instagram's first hire: a community manager.

At today's WIRED Business Conference, the Instagram cofounder and head of engineering sat down on stage with WIRED senior staff writer Jessi Hempel to talk a little about Instagram's major growth as a social platform. In their discussion, the two talked about Instagram's successes since its acquistion by Facebook, how Krieger approaches product design, and what the company is working on. But the most interesting point of the conversation was on this idea of building a product that was community-first.

Back in March of 2010, Josh Riedel was Instagram's very first hire. Hired specifically as a community manager, Riedel was brought on to help Krieger and cofounder Kevin Systrom work through the early user concerns of the company. Back then, usernames had to go through manual approval, so users wanting to change their username had to wait until either Systrom or Krieger got around to actually doing it. They realized that this delay would cause problems for them – I mean, after all, no user or customer likes to wait for anything; they simply didn't have the resources to focus both on community building and engagement, as well as on scaling the product. So, instead of bringing in an engineer as their first hire, Instagram brought in someone to manage their growing community of users – and that's made all the difference, enabling the company to scale quickly.

“What distinguishes us is community,” said Krieger. “Staying tuned in is really the key. From the beginning, our very first hire  – this is, like, against every business textbook [and everyone else in the business world's advice] of hiring engineers, [and] like, maybe hir[ing] some designers and PMs. We hired a community manager first…”

Instagram has a massive community of users – with more than 200 million active on the platform every month and approximately 7 billion photos. In 2014, the photo-based social network was the fastest growing major social platform among adults in the United States – with more than 26 percent of the U.S. adult population now on the platform. By 2018, the company is expected to hit 100 million U.S. users. So, when it comes down to it: Instagram's growth is no laughing matter; hence, making it more impressive that the company has managed to go so far despite its first hire being a community manager. And, according to Krieger, this primary focus on community is what allows them to continue to thrive despite the rise of several other competitors in this photo sharing space. They have a large and diverse community, and they've been able to leverage their own platform to actively engage with that community:

“And, nowadays, we really have an editorial team. [On] Instagram, we have an official account; we have a music account, where we're highlighting musicians on the platform; we have a Spanish language one; we have one in Brazil; [and on] our blog, we have multiple stories of data, featuring ‘hey, this person is doing something really interesting and creative' or ‘this is how people documented the festival lights in France' – we have a full range.”

During his discussion at the WIRED Business Conference, Krieger also talked about the biggest roadblock that the company has, especially considering the amount by which they've grown. According to him, Instagram's biggest challenge now is being able to continue to move quickly:

“It's easy to build consensus when it's me and Kevin in a room and we're just coding on things. It's harder when we're six engineers – as we were when we got acquired. It's a whole lot harder when we're 90 people. And being able to still scale up our product process so we can move quickly [is ultimately the biggest hurdle].”

But, IMHO, the most significant thing from Krieger's talk was…um…this:

Most important takeaway: Instagram’s @mikeyk just learned “on fleek” yesterday. Should we be concerned about this delay? #WIREDBizCon