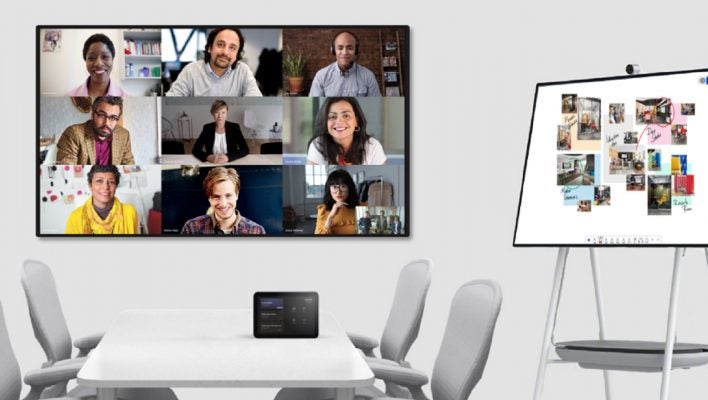 More companies than ever have been leaning on remote working software in 2020, thanks to the ongoing pandemic, and for this reason, new features to existing solutions are a welcome sight.

In its most recent update, Microsoft has rolled out plenty of new features, including increased functionality with its Surface Hub hardware.

There have also been some small quality of life changes in conjunction with other hardware options, such as live captions and the new ‘raised hand' option.

Many of the latest updates are centered around the Surface Hub, Microsoft's large display/electronic whiteboard device. While some of the features have been accessible on desktop for some time, it's now the Surface Hub's time to receive these updates.

One such feature is Coordinated Meetings, which enables both Surface Hub and Microsoft Teams Room devices to join the same meeting simultaneously, with Teams Room handling audio and video, and the Surface Hub muted. In this scenario, the Surface Hub display can be used to show important information or be used as a whiteboard. This will mean everyone can share the whiteboard and annotate at the same time, regardless of location.

Also new to the Surface Hub is the pin feature, which allows user videos to be pinned to the gallery and remain, regardless of who is talking. This has been present on the desktop version for some time, so it's pleasing to see it rolled out to the Surface Hub.

Another new feature is the proximity join, which allows a nearby laptop or mobile device to connect to the Surface Hub. The user's personal device will enter a content-only mode, while the Surface Hub provides audio and video. The mobile or laptop will have its microphones muted at this time to stop echo.

Other New Features for Microsoft Teams

While the Surface Hub gets the lion's share of the updates, there are also other devices that are getting a small upgrade. Microsoft's ‘collaboration bars' — Android-based displays that are intended for smaller groups — are getting the live captions feature added for the first time, which will make abilities more inclusive.

While it saw a desktop release earlier in the year, the Raise Hand feature is now coming to other devices, too. Designed to show when someone wants to make a point or join the conversation with a hand emoji, this addition can prevent attendees talking over each other and clearly signposts who is ready to speak. It is now available on Teams Room, Surface Hub and collaboration bar.

New granular levels of control have also been added to the Teams Admin Center, allowing Teams Room to be managed in the same place as collaboration bars and team phones. The update also allows IT admins to customize device management, as well as control enrollment, inventory management, software updates and other actions from one space.