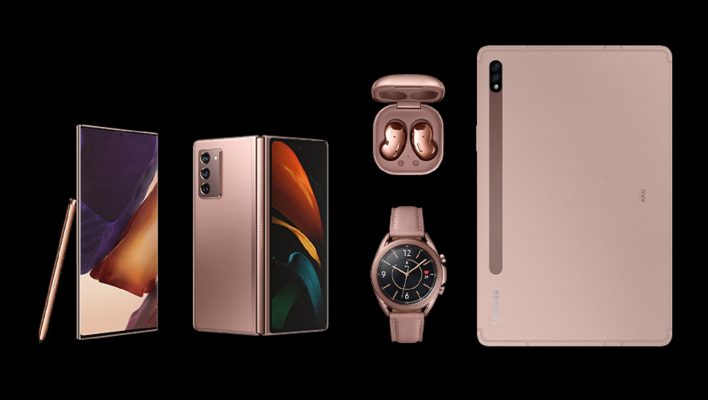 At Samsung's 2020 Unpacked event, the company revealed many of its flagship mobile devices for the next year, including phones, tablets and watches.

Throughout its announcements, Samsung made several references to the slightly surreal environment that the pandemic has created for many. It tied this context into a mantra that its devices were for both ‘work and play'.

Thanks to many months of leaks, there were no big surprises. The expected Galaxy Note 20, Watch 3 and Z Flip 2 all made an appearance. Still, we do now at least have more solid details on these devices, as well as release dates and pricing. 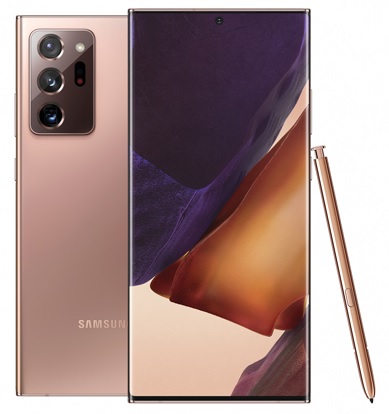 The Galaxy Note 20 was undoubtedly the focus of the show, with the new iteration coming in two flavors – Note 20 and Note 20 Ultra.

The difference between the two is a similar story  to last year's Note 10 and Note 10 Plus, with the latter the more premium model, offering a slightly more impressive specs list.

Not that Samsung would want you to believe the standard model Note 20 is some sort of weakling. The company was keen to point out the list of accolades it could attribute to the latest Note models, including the fastest processors ever in the Galaxy range, the toughest glass ‘on any smartphone', and the brightest and most vivid screen ever, too.

So then, how does the Note 20 Ultra stand apart? It's slightly larger to start with, boasting a 6.9-inch screen compared to the Note 20's 6.7. This makes it the largest Note yet, beating last year's Note 10 Plus, which had a 6.8-inch screen. It also has more memory (12GB RAM compared to 8GB on the Note 20), a higher resolution camera, and a slightly bigger battery.

Both models benefit from a new screen for 2020. Samsung is catching up to competitors such as the OnePlus 7T Pro, by offering a screen with a 120Hz refresh rate, which should make for a smoother viewing experience.

Of course, of the main point of difference that the Note famously has over traditional smartphones is the included stylus, the Samsung S Pen. This has also had some tinkering done to it, and Samsung claim to have got the latency down to just 9ms, thanks to a combination of prediction AI that maps ahead of your next pen stroke, and that increased screen refresh rate.

There's also a battery bump for both models, meaning that life expectancy should be improved from the Note 10 predecessors. You can also expect a 50% battery boost from half an hour's charge, according to Samsung.

At the event, Samsung also announced a partnership with Xbox to make its cloud gaming Xbox Game Pass available on the Note 20, with a library of over 100 games available, including Minecraft Dungeons, Destiny 2 and Gears 5. 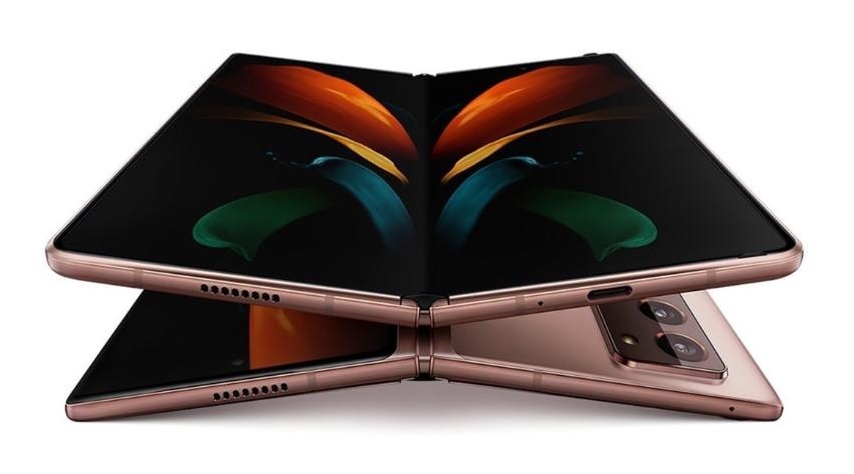 Last year's Galaxy Z Fold was among the first wave of foldable screen phones, but it experienced some major teething pains. So much so, that Samsung actually pushed back its initial release after journalists were less than kind about its build quality. Samsung has clearly taken these criticisms to heart, and went to great lengths to respond to them during the event with behind-the-scenes footage of the design and construction of the new model.

The original Z Fold always felt like a proof of concept that somehow became an actual retail product. The main issue with it was the build quality – social media was awash with Samsung fans with broken screens and broken hearts. Luckily, version II might not be as delicate.

The plastic screen of the first-gen model is being replaced with ultra thin glass. Apparently, it's as thin as a human hair – and hopefully, more hard wearing. The hinge too has been made stronger, and now boasts a built-in brush to sweep dirt away when closing (no, really).

The hinge can now be positioned in a variety of angles. The previous model would naturally spring wide open, but with the Z Fold 2, it's more akin to opening a laptop, for example.

Like the Note, it also gets a 120Hz screen. Speaking of displays, the Z Fold 2 now has a full size 6.2-inch front screen, instead of the tiny 4.6-inch screen of the previous version. Inside, the inner screen is 7.6-inches, a small size increase of the 7.3-inch of the original fold. Another key difference is the camera notch, which has been drastically decreased here, giving the user slightly more screen real estate.

K-pop band BTS were employed to do the official unboxing. We're unsure how many of its pre-teen audience will be able to afford a $2,000 plus phone, though…

Aesthetics and design also took centre stage with the Z Fold 2, and Samsung made a lot of fuss over the look and style of every aspect, right down to the box. K-pop band BTS were employed to do the official unboxing. We're unsure how many of its pre-teen audience will be able to afford a $2,000 plus phone, but the guys seemed excited to be involved if nothing else.

Despite all these changes, it seems that the Z Fold 2 still needs a little longer in the oven, as Samsung wasn't ready to announce a release date, price or technical specifications. Instead, it promised another event with more information coming on 1st September. 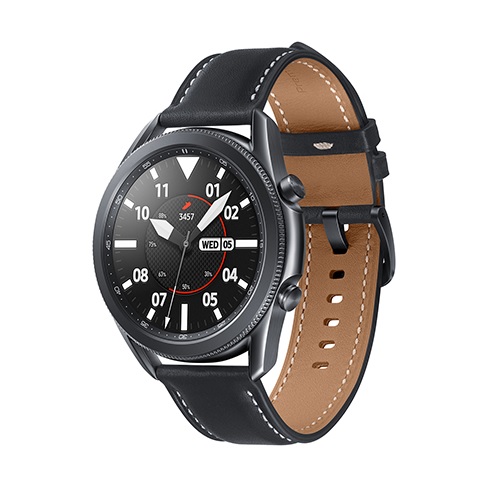 Thanks to a series of leaks in the past few weeks, there were few surprises at the event, and the appearance of the Galaxy Watch 3 was as predictable as the sun rising tomorrow.

The Watch 3, at a glance, looks very similar to the previous model, with round face and rotating bezel. However, there have been some changes in its design

The new Watch is 14 percent thinner and 15 percent lighter. Despite this, the screen size has increased to 1.4-inches on the larger model, as its available in both 41mm and 45mm variants.

Both version have OLED, Gorilla Glass screens, and are available with Bluetooth-only, or Bluetooth plus LTE.

Fitness and fashion were the two main use cases that Samsung chose to demonstrate with the Watch 3. Health monitoring is set to include blood pressure, ECG and blood oxygen levels, all at the push of the button, as well as workout tracking and plans.

While the health applications of the Watch 3 were repeatedly mentioned, Samsung was also at pains to point out that the watch was ‘not a medical device', and that blood pressure should still be checked regularly with a traditional sleeve.

Viewers were also treated to a demonstration of how to take a photo of your outfit, to enable your Watch 3 to find the best coordinated watch face.

The company also marketed the Watch 3 as a fashion accessory, pointing out the 80,000 plus available faces (‘the largest watchphone ecosystem in the industry'). Viewers were also treated to a demonstration of how to take a photo of your outfit, to enable your Watch 3 to find the best coordinated watch face. 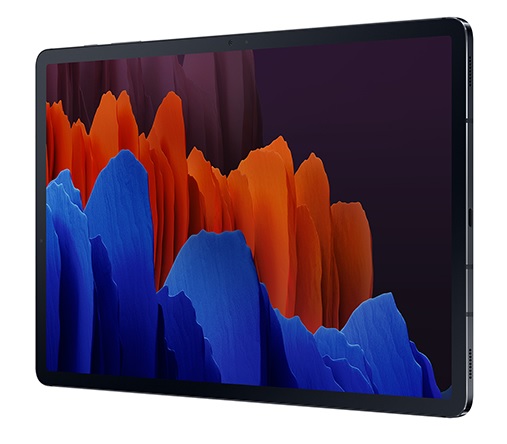 The Android tablet market has been shrinking in size for several years, but it hasn't stopped Samsung from making its own Tab series to keep Apple on its toes.

The Tab S7 and S7+ are available in 11-inch and 12.4-inch sizes respectively, and like the Note 20 phones, Samsung is keen to tell its audiences about the achievements of the S7 series.

These include the most advanced display on a tablet (they get a 120Hz refresh rate like the Note 20), and the slimmest tablet of its size on the market (S7+).

You might be asking yourself if you need to buy an Android tablet in 2020, but we can't deny that the S7 series has some pretty neat tricks up its sleeve. First up, it can juggle three apps simultaneously, meaning you can watch a video, hold a chat and type a message all at the same time. Apple's iPad can only manage two. They also happen to be the first 5G compatible tablets in the US. These are likely to be great tablets for business, and able to compete with the iPad Pro.

There are some other cool features, like being able to use the tablet as a second screen for a Windows 10 PC – something that probably pricked up the ears of every home worker currently coping with a single laptop display.

Yes, you do get the S Pen included with the tablet, so that's one in the eye for Apple's accessory policy.

The S7 and S7+ are also compatible with the S Pen. And, like the Note 20, the tablets had their latency for drawing reduced to just 9 ms. The S Pen is able to connect magnetically to a strip on the back of the tablet, which also doubles as a charging spot. And yes, you do get the S Pen included with the tablet, so that's one in the eye for Apple's accessory policy.

A new keyboard attachment for the tablets can make them feel more like a laptop, especially as the redesigned touchpad is bigger, allowing for multi touch, and keyboard supports shortcuts, for the first time. It also doubles as a stand, its multi-angle positioning is very reminiscent of Microsoft's approach with its Surface range. We've found these super sturdy in person, so have high hopes for Samsung's approach.

While the stand is clearly Microsoft inspired, we wish that Samsung hadn't followed Apple's lead with the iPad Pro in ditching the headphone slot.

Like the Tab S6, the Tab S7 supports DeX, which is Samsung's way of making mobile devices more like computing experiences. Attach the S7/7+ to its keyboard case, and DeX will automatically adjust the interface accordingly, offering mouse support and even a toolbar. 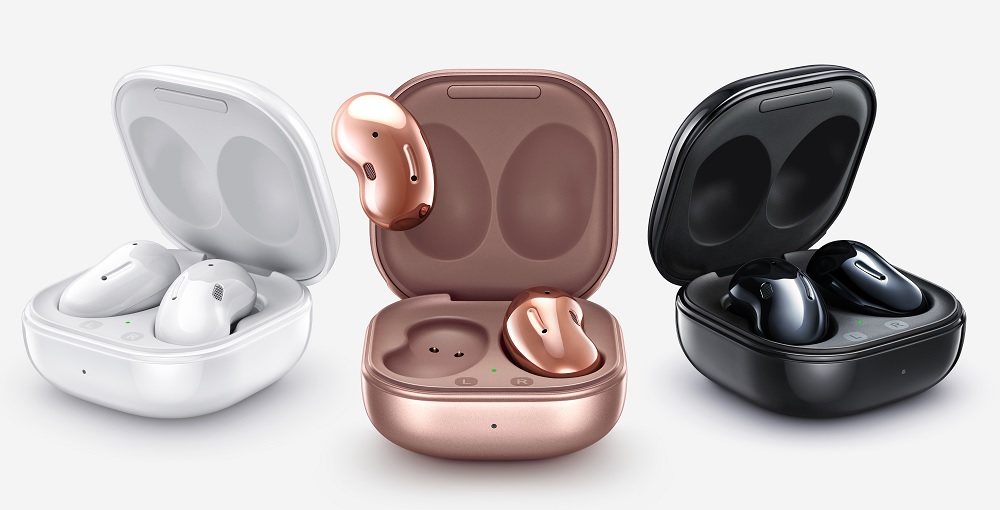 Galaxy's wireless headphones were on show at the event, with the Galaxy Buds Live being demoed as the latest must-have gadget.

The kidney-shaped ear pieces were an excuse for Samsung to fall back into its old ways and take a dig at old rival Apple, saying, ‘there's no awkward stem sticking out!’

To Samsung's credit, the discreet plugs do seem ergonomic and comfortable.

Style was a consistent theme of the event, but so was sustainability. While the Buds Live did look incredibly well designed, it was pointed out by the company that both the earpieces and case are made from recyclable materials.

The Buds Live have a battery life of six hours, while the case can provide 21 hours charge.

Three built-in microphones are designed to make calls easier, and can actively block out background noise up to 97%. The Buds also have a noise cancelling feature for when you're listening to audio, a first for the range.

The Buds Live are also able to share audio from once device, across two pairs, with universal sound control.

Galaxy Buds Live are available from August 6th, priced at $169.99