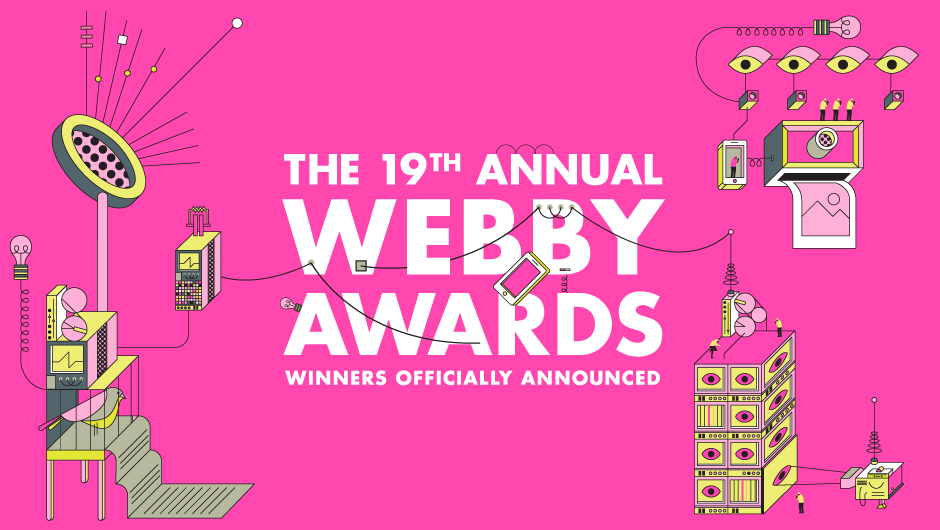 The 19th Annual Webby Winners have been announced! The Webby Awards are the Internet’s Highest Honor, culled from nearly 13,000 submissions this year, representing the entire Internet. Winners are chosen by the International Academy of Digital Arts and Sciences, which also selects the Nominees in each category. In the spirit of the open Internet, a second Winner in each category is also selected by members of the voting public. Submissions can be entered in more than one category, and this year, Google could be found throughout the awards as a top winner, taking home more than 40 awards and nominations.

Some of our favorite winners throughout the categories include:

This addictive, interactive map game challenges users to locate the exact place on the map where an attraction is found – just by using hints about the attraction. Google Smarty Pins took home the Webby Award for Websites: Games and Websites: Best User Interface.

Under Websites: Art, fans were thrilled with this project and voted it into the top honor for People's Voice. With Google Street Art, users are able to browse online exhibitions featuring leading street artists and their work. This is a brilliant way to tour the streets of the world – check it out!

Among our favorite tools to organize thoughts, notes, images, and files – Evernote and Dropbox also received honors in the Websites: Best User Interface category. Evernote updated its interface last year, and Dropbox's user guide is one to model when telling your product's story.

Special mention needs to be made of this startup's ability to keep claiming top honors – from TechCrunch Disrupt to Harvard's New Venture competition. Alfred Service received the Webby Award in two categories: Websites: Best Use of Animation or Motion Graphics and Websites: Best Home/Welcome Page.

We're especially proud to have discovered this weird website while they were in beta testing, and the voting public agrees: Invisible Girlfriend won the People's Voice Webby for Websites: Weird.  The people have spoken!

Porch.com is having a banner year – from announcing their Series B financing to announcing partnerships with the Better Business Bureau and major real estate companies, they can now add a Webby Award to their pride shelf! The data-driven home services network was given an honor in the Websites: Real Estate category this year.

What would any “best of” list in 2015 be without at least a few mentions of Product Hunt? The internet's best place to submit startups, products, and tech resources took home a Webby for Websites: Guides/Ratings/Reviews and Webby: Email Newsletters.

Cornell Tech, a program to develop leaders, entrepreneurs, and forward thinkers in our digital age, was voted the People's Voice winner for Websites: School/University. The site details how the Cornell Tech programs foster innovation and a builder mindset in a really sleek and easy-to-understand way.

This alcohol delivery app got the attention of the internet's voting masses. Distiller won Mobile Sites & Apps: Food & Drink for its expert delivery of information regarding all things spirits.

This mobile shopping app is described by cofounder David Tisch in this way: “For consumers, it’s every one of your brands in a beautiful app. For brands, they get a direct-to-consumer channel that they control.” So it's no surprise that Spring won for Mobile Sites & Apps: Shopping (Handheld Devices).

Another startup that's on a roll is HotelTonight. The minimalist last-minute travel planning app just keeps adding improvements so that consumers can live a “life less planned.” HotelTonight won Webbys for Mobile Sites & Apps: Travel (Tablet & All Other Devices) and for Travel (Handheld Devices). They took home these same honors in 2014! They must be doing something right.

This message is brought to you courtesy of a media partnership between Tech.Co and The Webby Awards.