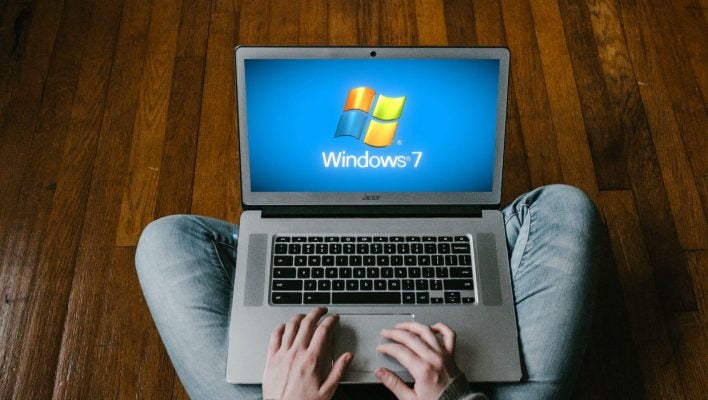 All good things must come to an end, and this month, the much beloved (no, really) operating system Windows 7 will be losing support from Microsoft. If you're still using Windows 7, it's time to move on – we explain why, plus what your best options are.

After enjoying more than a decade of support, Microsoft is sunsetting Windows 7, focusing its resources on the Windows 10 platform instead. While Windows 7 machines will still work after the cut off date, they will no longer benefit from essential security updates. This means it's potentially unsafe to continue using a Windows 7 computer after 14 January.

Below, we explain the main options for Windows 7 users, and how to be prepared for that 14 January deadline.

A Short History of Windows 7

Windows 7, released in 2009, had keen supporters from the moment of its launch. This is thanks to its fuss-free, focused goal of providing a simple, uncluttered Windows experience. Unlike its predecessor, Vista, which was awash with features and pop-ups, Windows 7 prioritized a clean user experience and logical menu structure.

The success of Windows 7's design was demonstrated further by Microsoft's next operating system, the disastrous Windows 8. The new tile-based approach failed to win over users, and many stuck with what they knew rather than upgrading. The lack of the classic Start button in Windows 8, plus its touch-focused design, meant that not even the offer of a free upgrade to Windows 10 could tempt some away from their beloved Windows 7.

However, as 2020 begins, the end of the line is in sight for Windows 7. Microsoft has already long since stopped supporting it with new feature rollouts, but the crucial difference is that after 14 January, it will no longer receive security patches. If you're still using it, it's time to move on.

So, why is Microsoft choosing to stop supporting Windows 7? The lifecycle of the average Windows operating system clocks in at around 10 years, and even though many of us have moved on from Windows 7, and even Windows 8, legacy software is still supported by Microsoft. The main reason for this is security.

Your own PC's security is a daily tug of war between hackers and software/hardware providers. Always looking for the next exploit, hackers tirelessly comb through code that could be used to find a way to influence your device. This could be installing a trojan, which could take control of your PC, or intercepting important financial and personal information. In order to combat this, software providers such as Microsoft are constantly updating their platform to close off any new exploits that have been found. Yes, the seemingly never ending updates that await you when you boot up your PC are annoying, but without them, you'd be a vulnerable target, and running antivirus software won't be enough to protect against exploits of the operating system itself.

Windows 7 has since been replaced with Windows 8, 8.1, and 10, meaning that for Microsoft, it's no longer viable to keep providing security updates for the platform. After the cut-off point of 14 January, Windows 7 devices will still work, but they'll no longer be protected by Microsoft security updates.

After the cut off point of 14 of January, Windows 7 devices will still work, but they'll no longer be protected by Microsoft security updates.

Upgrading from Windows 7 – Your Options

If you're still working with Windows 7, then it really is time to move on, especially if you value your online safety. Luckily, there are several options open to you:

1. Upgrade your device to Windows 10

The most obvious option is to simply buy a licence for Windows 10 and update your current device. However, it's important to be sure your computer has the necessary specs to run Windows 10 without issues. Older systems may not have the horsepower needed for this newer OS.

For a period, Windows 10 was available as a free upgrade for Window users, but now, you'll have to actually purchase it. If you buy the software key directly from Microsoft, it will cost you $139. If you shop around retailers, there's a chance you can get it cheaper – Amazon sells it for under $100 as an example.

If you're a student, you could well be entitled to a free copy of Windows 10 Education. You can check on Microsoft's own site to find out if you're eligible.

Chances are that if you're running Windows 7, your laptop or PC might be getting a bit long in the tooth. Can you even be sure it would be able to run Windows 10 smoothly? While it's not the cheapest option, a new device would future proof you for many years to come. Whether it's a $200 entry-level laptop or a high-end model with all the bells and whistles, it will come with Windows 10 pre-installed.

If you want to see what your options are check out our guide to the best laptops for 2020.

3. Buy a MacBook or Chromebook

Perhaps you've had enough of Windows, and want to take the end of Windows 7 as a opportunity to see what else is out there. In this case, your options are an Apple MacBook or a Chromebook. Both offer different functionality. Apple's MacBook is aimed at demanding users, while the Chromebook is mainly a low-cost alternative that is best for those who want to write documents, send emails and browse the web. With a Chromebook, you're somewhat expected to always be online, as these laptops run “web apps' instead of full software programs, and you save your files in the cloud.

A fourth option is to switch to the free Linux operating system. You could, feasibly, install this on your existing Windows 7 machine, but this isn't for the faint-hearted. We wouldn't recommend it to those that don't have a bit of technical know-how.

Back Up Your Device

Whatever you decide to do, whether it's upgrading your old device or getting a whole new laptop, there's a step you should take to ensure that you don't lose any of your important files – back up. This is good practice even when you're not taking the major step of upgrading your operating system, and there are several ways to do it:

A stress-free way to back up your files can be by using external storage. This could be an external hard drive, USB drive or even a memory card. You can simply plug one of these into a USB slot and transfer all your files onto your new device (or upgraded device). If you choose to adopt this process on a regular basis, just to be sure you have to copies of everything. We'd suggest making sure you keep on top of it make it a scheduled routine, so your backups are always recent.

A more convenient way to back up data is with cloud storage, using services such as Google Drive or Dropbox. This means that no matter where you are, you'll have access to your files (as long as you have an internet connection). Depending on what service you are using, it's even possible to schedule regular uploads to the cloud, so you can be sure that your latest files are always backed up. Once you've upgraded to Windows 10, it's simple a case of connecting to your cloud service and downloading your files again.

Backing up your  device is generally good practice, and one to follow even after you've upgraded.

If you really can't bear to part ways with Windows 7 yet, then there is an option open to you, but you'll need to open your wallet. For those that aren't yet ready to upgrade, Microsoft offers Extended Security Updates, meaning that Windows 7 will still be supported, but at a price. The service is primarily aimed at businesses who are struggling to upgrade their systems in time for the cut off – it's not even possible for Windows Home users.

It's not an ideal solution, and not intended for personal users.It's really a stop-gap solution for businesses that aren't quite ready to move their entire fleets of devices over to a new OS, or purchase new hardware.

For anyone running a Windows 7 computer as their home PC, meanwhile, it's time to get shopping for a new device.