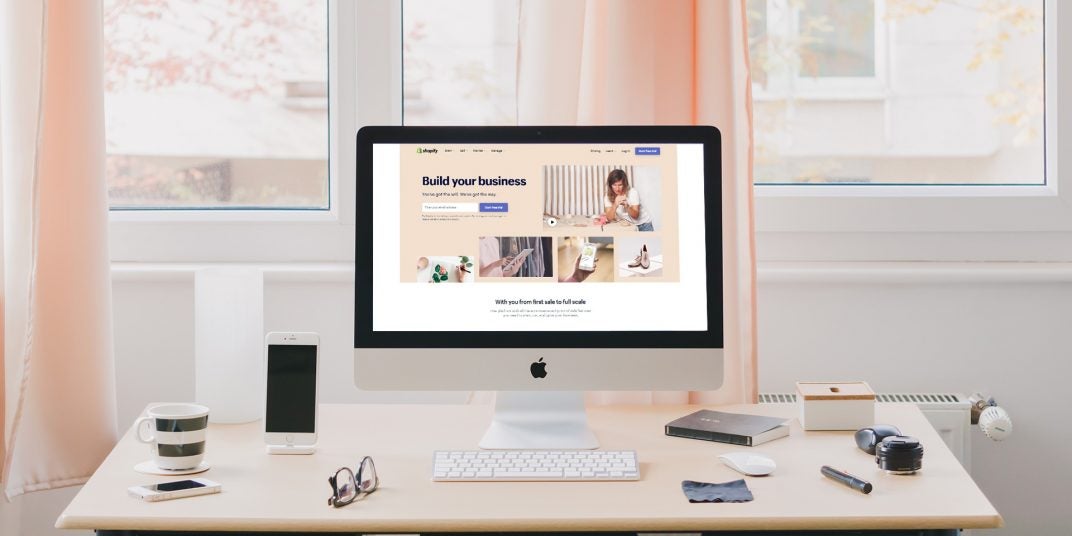 Shopify is one of the biggest and best ecommerce builders on the market, allowing you to create and manage an online store and loads of different sales channels. But what do the Shopify pricing plans look like?

Obviously, this level of quality doesn’t come cheap. But, reassuringly, Shopify has some good-value plans perfectly suited to a smaller ecommerce store. Shopify can be as cheap as $26 per month (paid annually in advance). However, this rises steeply to as much as $299 per month for huge scale online stores. You can have a taste of Shopify for free, however, thanks to a zero-cost 30-day free trial that Shopify offers.

Shopify’s plans might seem expensive, but we think they’re worth it given that you’ll be making a return on the investment.

In this guide we’ll run through each pricing plan, what features they give you, which pricing plan is right for your business, and how Shopify compares to its competition.

Shopify offers five pricing plans in total: Shopify Basic, Shopify, Shopify Advanced, Shopify Lite and Shopify Plus. The first three are designed to for small to medium-sized businesses; Shopify Lite is a cut-back package which only allows for sales on Facebook; and Shopify Plus is a bespoke package for large businesses and high volume merchants.

Let's take a closer look at the three Shopify pricing plans, below:

One thing to bear in mind with Shopify is that some features – customer reviews for example – are only available as third-party apps, and they might require some additional cost to use at scale. 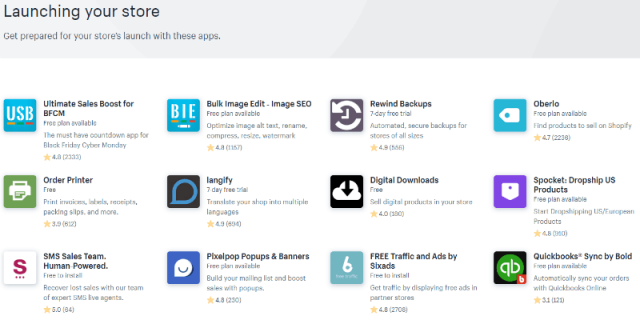 Depending on what type of business you run, these are the pricing plans you should go for:

Shopify Basic is designed for small businesses just starting out on their online sales adventure.

It allows for just two staff accounts, and while it does offer the Shopify point-of-sale app for offline sales, you don’t get access to some of the hardware support available to the other plans. You’ll also find less favorable shipping and credit payment processing rates.

The best choice for growing businesses

Shopify’s confusingly named middle plan, Shopify, is designed for businesses which are looking to grow.

The biggest advantage of this plan over Shopify Basic is the improved point of sale functionality. You’ll be able to set up cash register shifts, as well as receive support for hardware peripherals such as barcode scanners and label printers. You’ll also get unlimited Shopify POS app staff PINs and support for third-party POS apps.

A big jump in price from the Shopify plan, Advanced Shopify is reserved for established on- and offline businesses.

The big improvements from the Shopify plan are to be found in the post-sale area. For example, you’ll get access to Shopify’s advanced report builder, which lets you save custom reports for future reference and better tracking over time. Third-party calculated shipping rates become available, and credit card payment processing rates become cheaper still.

A decent choice for sole traders

Shopify Lite is the cheapest plan offered by Shopify, but it doesn’t offer access to the Shopify online store platform.

Instead, you can use the Shopify sales platform to sell on Facebook and communicate with your customers using Messenger. You can also use Shopify Lite to sell products on another website you already own. For example, if you use WordPress, Squarespace or Tumblr, you can add Buy Buttons for each of your products and turn your existing site into an online store.

The Shopify Plus Plan

Bespoke plans for the biggest businesses

Shopify Plus is the plan designed for enterprise level businesses and very high-volume merchants. There’s no set price, as you have to call up and get a quote direct from Shopify.

Shopify Pricing — What Are Its Hosting Costs?

As soon as you sign up for one of Shopify’s premium plans (with the exception of Shopify Lite), you get website hosting thrown in for free.

You can use a new or existing domain name, plus your store will have unlimited bandwidth and SSL and card payment security. 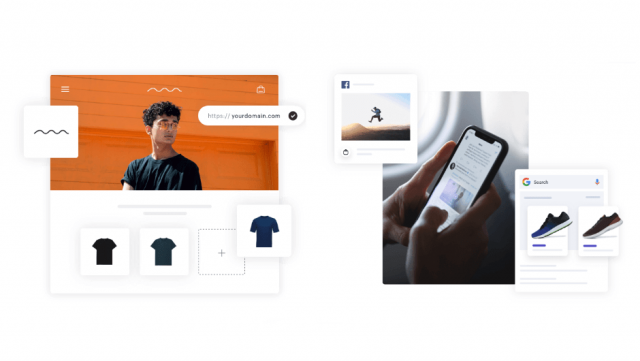 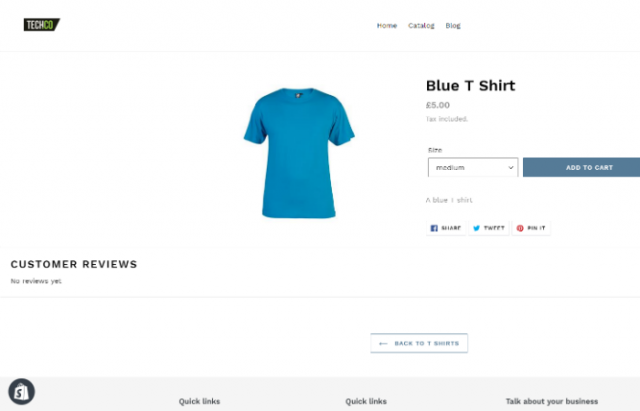 While we think Shopify is the best all-round ecommerce platform in the business based on our testing, there are several alternatives.

It has several serious competitors, including BigCommerce and Volusion, which offer similar online store and sales channel management products. However, you can also use website builders such as Squarespace to create an online store.

In our testing, we found that Shopify excelled in its sales functions and had good website customization. However, BigCommerce had a lot of website functionality which was unavailable on Shopify, including blogs and website forms.

We answer all of your most pressing questions about Shopify's pricing plans in one quick and easy section.

Is Shopify free to use?

There's a 14-day free trial but there's no free plan with Shopify.

How expensive is Shopify?

Shopify's cheapest plan, Basic, starts from $29 per month. This plan includes your domain and all of Shopify's excellent accounting, tax, and inventory tools. In fact, it's easier to say what you don't get with the Basic plan rather than list everything you do. You won't be able to issue gift cards for your store and it doesn't include hardware peripheral support — this is essential if you want to run a bricks-and-mortar store as well as a website. You'll also find that credit card processing rates are slightly more expensive than on Shopify's other plans.

The next plan up is simply called Shopify. It costs $79 per month, which might seem like a big jump but you're getting a lot more bang for your buck. You get access to gift cards and hardware peripheral support — both of which could easily cover the $50 per month price bump. It's important to remember when choosing an ecommerce platform that you will be making money as a result of using the service so it pays to think of Shopify and its rivals as overhead business costs rather than unecessary services.

Shopify's final plan is Shopify Advanced and it costs $299 per month. Again, this is a big jump from the $79 per month Shopify plan. However, if you're investing in this plan its likely that your business will have several employees — you really don't need it if you're just starting out. You'll be able to set up 15 staff accounts and you'll get access to an advanced report building tool which can be useful for optimizing sales performance.

The first thing to know about Shopify's transaction fees is that you will be charged unless you use its Shopify Payments processing system. Shopify Payments does away with the need to set up a third-party payment provider or a merchant account.

If you don't choose to use Shopify Payments, you'll have to set-up with a third-party payment provider. This third-party company will charge Shopify a fee for managing payments, and Shopify will pass this cost onto you — fees vary by payment provider so make sure you size-up your options before committing.

Nope, and you'll be hard-pressed to find an ecommerce platform that does. There are simply too many steps for the process of selling, collecting the payment, processing the payment, etc. to be completed in one business day.

If you're using Shopify Payments, the time it takes for you to get paid varies from country-to-country. If you're in the US or Australia, you'll get paid in two business days. If you're in other countries you might paid within three to four days. You can find out how long it'll take you here.

If you're not using Shopify Payments, the time it takes you to get paid will vary according to your payment provider.

How often does Shopify payout?

With Shopify payments, you'll get paid every time a transaction happens. It might take a little while – don't expect instant money transfers – but you will reliably get paid per transaction.

Can you use PayPal with Shopify?

You bet. In fact, PayPal is one of Shopify's default payment providers. As soon as you open a store, you're given a PayPal Express Checkout account linked with the email you used to sign up for Shopify. If you use PayPal as your payment provider, rather than Shopify Payments, you will be charged transaction fees sadly.

Customers will still be able to check out using PayPal regardless of which payment provider you use, as long as you have it set up as an option.

What are the benefits of using Shopify?

Shopify is one of the easiest ecommerce platforms to set up and use for businesses of any size. It's slick, simple UI makes setting up an online store super easy for novice or experienced entrepreneurs alike. Plus, its platform allows you to sell your wares across an unrivalled number of sales channels ranging from Instagram to eBay and Amazon. You can even set Shopify up to work with your bricks-and-mortar store, as well.

Shopify also has some of the best back-end functions of any ecommerce platform. Its accounting and reporting tools, for example, are powerful but extremely easy to use.

Shopify has excellent support options, including 24/7 phone and live chat support. Plus, it has a huge knowledge base and forums to help users fix their own problems quickly and easily.

It might be a touch more expensive than some of its rivals, but we think that Shopify's quality more than makes up for its slightly more expensive plans.