2019's Apple Worldwide Developers Conference, WWDC, is happening in San Jose, CA, from June 3 to 7, and it just launched with a keynote that detailed all of Apple's big new software updates, news, and reveals.

A new Mac Pro, available starting at a hefty $5,999, debuted along with the biggest iPad software update ever, iPadOS, and new updates that include iOS 13, macOS Catalina, and tvOS.

Apple's in the middle of a huge pivot towards subscription services, from Apple Arcade to its own credit card, making this software-centric conference even more important. Here's the biggest and best news out from this year's event.

A redesigned home screen comes with multi-user support, ensuring everyone gets their own “up next” list, along with personalized recommendations for their next watch.

tvOS plays music right alongside lyrics, letting people sing along easily.  Xbox One X and Playstation Dualshock 4 are supported as well, which is news that got plenty of applause from gamers at WWDC.

And it doesn't have anything to do with the software, but Tim Cook shared the very first trailer for Apple's new lineup of TV shows. Here's the first look at Apple's new original series For All Mankind, from Battlestar Galactica showrunner Ron Moore.

A bunch of new faces were debuted for the Apple Watch, including digital, analog, and solar designs. New apps include Audiobooks, voice memos, and a calculator with a built-in bill-splitting feature.

And, topping it all off: The Apple App Store is coming to Apple Watch. Watch users will be able to view the entire store and scrub through the specs of any app, all from their watch. Curated app collections will make it a little more bearable to scroll through the app store on the Watch's tiny screen. 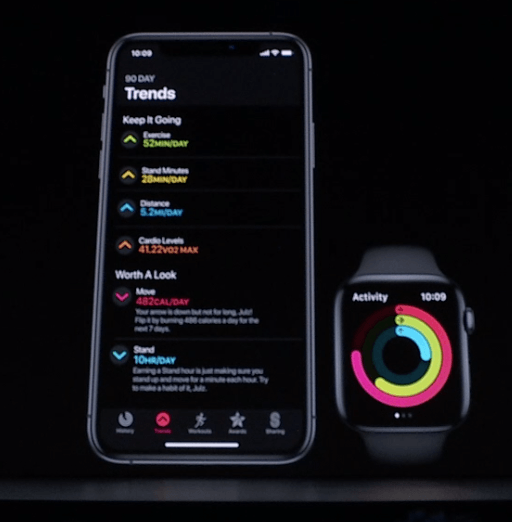 Fitness is a huge aspect of the Apple Watch's appeal, so it's no wonder that Apple gave the category its own chunk of the WWDC keynote. The big news: Activity Trends, an entire area of the watch for tracking personal fitness stats.

New features aimed at health include a Noise app that uses the microphone to detect decibel levels and warn users when it may be too loud. Privacy is a factor, as audio samples are only recorded periodically, and the app never saves audio recordings.

Cycle tracking is another incredibly useful and long-awaited feature: It tracks women's menstrual cycles, notifying them when it's about the begin. It'll be available on iPhone as well as Apple Watch.

Apple has shown that yet again, its aggressively pursuing the wearables market. Fitness tracker manufacturers, watch out.

The 97% customer satisfaction in iOS 12 hasn't kept Apple from pressing forward with the next major release. Here's what iOS 13 brings to the table.

It's a speedier OS, with 30% faster Face ID unlocks, 50% smaller app downloads, 60% smaller app updates, and, most impressively, launch speeds that are twice as fast as the last OS.

Dark mode is coming to iOS: Home screens, apps, calendar, notes, and messages can all come with a black background.

Time-synced lyrics are available on iOS for the first time, just as they are on tvOS. Mail supports rich fonts, Notes has a gallery view and support for folders. Reminders are totally revamped: Type what you want and reminders figures out how to notify you.

New memoji updates include eye shadow, piercings, teeth, and hats. Memoji stickers can let you personalize a ton of different reactions, straight from your keyboard across any device.

A new Google Map will roll out across the entire US by the end of the year. Roads, beaches, parks, and buildings are all visible. A new binoculars icon can open a 3D view of a location with a few taps, and the 3D model can be zoomed in and manipulated too, essentially turning your destination into an AR environment that you can navigate before even starting your trip.

A simple API lets developers put a “sign in” button on their app, letting users sign in with Apple ID in order to avoid sharing unneeded information. Users can opt into a feature that lets Apple auto-generate a new email address that forwards to the user's, giving that user control over whether they allow an app to email them updates.

With the new iOS update, users can pinch in or out to zoom in on their photos straight from the photo stream. With a little AI, the new update can figure out which images to consolidate into folders and when to display them: If you visit WWDC every year, Photos will learn and display folders for all your past WWDC visits at the right time to let you revisit the experiences.

Siri now has 100,000 radio stations from around the globe. Home pod can now recognize which family member is talking, and personalize their music, notes, or more.

A big CarPlay update includes a new dashboard that auto-suggests useful actions, like a garage door opener just as you arrive at your home.

Siri Shortcuts remain a big deal, with a built-in app as of iOS 13. The “suggested automations” feature is new also, and it helps users figure out which new shortcuts they may want to build. In addition, the text-to-speech function is even better sounding thanks to AI. 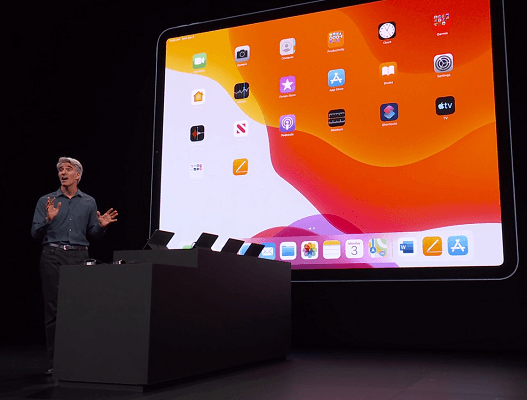 A brand-new OS, iPadOS, was one of the surprises Apple revealed at the keynote. Here's what it does.

A “slideover” section on the right can house an array of secondary apps that can be seen at the same time as a main app. A split-screen function allows you to give equal weight to two apps, if you'd prefer that. App Exposé, previously only available on the Mac OS X, is now a part of the iPadOS user interface. You can also pin widgets directly onto the homescreen.

Files come in column view, giving you a file preview, quick actions, and metadata for each file all in one view. File-sharing is easier than ever across devices. You can now plug in a thumb drive, disc drive or SD card.

Desk-top class browsing is debuting in order to make sure you'll never see a mobile view when you wanted the desktop one. A download manager is hitting Safari as well, and custom fonts will be available for download.

Finger gestures are getting a big upgrade on the iPad. You can now highlight a selection with a finger swipe and no need for a clumsy double-tap. A single three-finger swipe can undo the last action. You can also jump around a long document. You can shrink the on-screen keyboard to a smaller, more manageable version with your fingers as well. 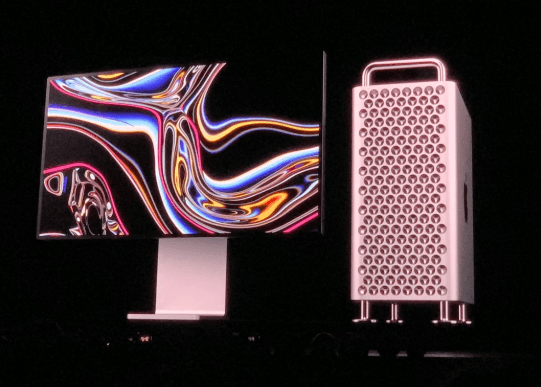 A new Mac Pro debuted at the keynote, too. It comes with a stainless steel frame and handles that are optimized for stability. A 28-core Intel Xeon processor offers 300 watts and can run all the time, with a max of 1.5 terabytes of system memory.

Two USB-C / Thunderbolt 3 and two USB-A ports are included. The Pro also boasts six-channel memory with 12 DIMM slots and eight PCI Express slots, four of which are double wide. A custom expansion module also debuted at the keynote: An MPX module is available, as is an I/O module that comes with an optional Afterburner graphics card capable of processing 6 billion pixels per second and three streams of 8K, which removes a need for proxy workflows.

The new Pro runs on a max of a 1.4 kW power supply, cooled by three huge fans that stay as quiet as an iMac Pro.

It also comes with optional wheels so that you'll be able to move the new Mac Pro around the studio (this got a little applause at the keynote, so I'm assuming those wheels will save a lot of developer's backs).

HDR has been superseded by XDR, which stands for “extreme dynamic range,” and is included in the title for the super-wide 32-inch viewing display for Apple's just-announced new 6K monitor, the Pro Display XDR.

Anti-reflective matte coating works thanks to nano-texture glass that won't lower quality. A new back-lighting system better shapes and controls the light behind the screen, maintaining 1000 nits indefinitely, and peaking at 1600 nits. The upshot? HD content can now be edited in real time, while allowing editors to see it exactly as it was meant to be seen.

A Pro Stand allows the display to rotate for a picture mode view, great for editing code.

iTunes is essentially splitting into three apps: Apple Music, Apple Podcasts, and Apple TV. Now, when you plug in your iPhone, you won't see a Sync prompt. The spoken content on Podcasts is now indexed, and Apple can let you search podcast audio, letting you find a show even if you don't know the title.

The Sidecar app is new: With it, Mac users can now use an iPad as a second display for their Mac, giving the two devices more intuitive integration than ever.

Project Catalyst is a new system that lets developers quickly port over apps for the Mac that are based on their existing iPad apps. It's available to developers today in macOS Catalina, and already has a few rave reviews that the keynote showcased. While there's a lot of new functionality to discuss, the keynote focused on two areas: AR and Swift.

ARKit 3 is a big update that includes people inclusion. With it, compositing isn't need, as people can be dropped into an AR experience in real time.

A new framework for Swift, SwiftUI, lets developers build in Swift code while using a lot less actual code, and includes cutting-edge functionalities like localization for right-to-left languages or even the just-revealed dark mode.

The code editor updates a preview display immediately, making Swift app coding a fast process. It's available across all Apple platforms, all on a common API. With it, developers should have a quick and easy way to start developing the most modern apps available.