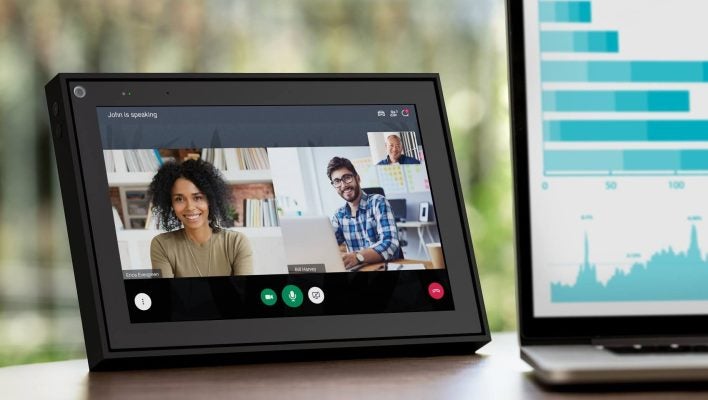 Meta is changing the target audience for its Portal smart display from consumer use to business use.

The news comes in the middle of a larger hardware shakeup at the company most well known for its Facebook social network: Meta will be ditching the AR glasses and smartwatch models it has worked on for years.

Meta's proposed Metaverse is still many years in the future, and massive amounts of AR-equipped hardware are key to the existence of the virtual space, so it makes sense that they're taking their time as they attempt to develop the groundbreaking tech. But the path to the Metaverse remains a rocky one.

Meta currently sells four devices in its Portal range, from a $99 TV-operable camera to multiple smart displays designed for video calls, with the priciest costing $349. Going forward, though, all Portal products will be sold for business use, and not to consumers.

We can't say for sure what led to the change in direction aside from cost control: The Portal range doesn't seem to have sold well. According to The Information, which broke the news, Portal sales make up just 1% of the global market for smart displays and speakers.

Plus, with inflation on a steep rise in the US, consumers may well be even less likely to shell out for a $349 smart display at any point in the foreseeable future.

Businesses, however, are more frequently remote than ever before thanks to pandemic-related shifts in work policies, so there's an opportunity for a hardware station dedicated to video calls inside every physical office building.

The Portal pivot is far from the first indication that Meta is looking towards businesses, despite Facebook's main audience being “every consumer you know.” Meta launched a WhatsApp service specifically for businesses just last month, and has positioned its nascent Metaverse as the next evolution in workplaces.

“Meta has decided to not commercially release what was to be the first version of the AR glasses, codenamed Project Nazare, which was reportedly scheduled to launch commercially in 2024,” the Information reported.

Meta will still be releasing AR glasses, however: The team will be moving to a second version, which will mean the release date is pushed back another few years.

Meta's smartwatch plans are similarly changing, as they'll be stopping work on a smartwatch prototype that would have included GPS, WiFi, built-in Spotify, and dual cameras. They'll keep considering other smartwatch ideas, however.

While the news is a setback, it could be a sign that Meta has picked more promising development avenues — after all, it isn't giving up entirely on either type of hardware. At least, that's the reasoning that Andrew Bosworth, Chief Technology Officer at Meta, used in his response to the news:

We're going to ship wrist wearables and AR glasses that bring completely new tech—like EMG— to market. The path to groundbreaking products is not a straight line. As is common in our industry, we iterate on multiple prototypes in parallel & shift resources as we learn.

We can't judge Meta's hardware until it arrives, which won't be for years. Meta's first hardware store showcase will have room on the shelves for a while.

In the meantime, businesses can take a look at all the top video conferencing services we've rounded up, as well as the hardware they have to choose from. AR glasses may still be in the future, but remote work is here to stay.