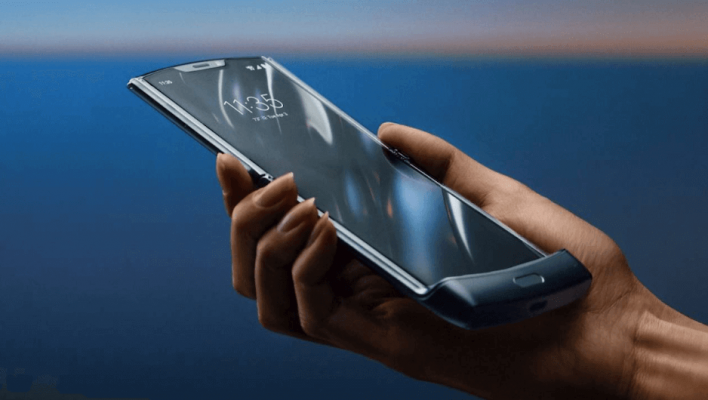 There's now officially a third company entering the foldable smartphone market, as Motorola announced the new Razr at a press event Tuesday night. And the device has a unique design that is finally shaking things up a bit.

Foldable phones went from ambitious pipe dream to complicated reality this year with the launch of the Samsung Galaxy Fold and the Huawei Mate X,  but rollouts have been far from flawless. The Galaxy Fold endured multiple launches due to flimsy press devices, and the Mate X saw more than its fair share of delays before its eventual launch in China. However, these devices are now on the market, which is ushering in a new era of smartphone technology.

Now, Motorola has hurriedly entered the fray with the new Razr, a clam-shell style smartphone with a 6.2 inch foldable plastic OLED panel. But will it be able to compete in a smartphone market that has all but forgotten the popular device of the mid 2000s?

What Is the Motorola Razr?

Often considered one of the most popular mobiles devices to precede smartphones, the Motorola Razr was a notably sleek, decidedly unique flip phone that turned into a social symbol over the course of its reign on the market.

Since then, non-smartphones have remained a mere memory, exclusively used as burner phones in crime movies and not much else. But with the advent of foldable screens, Motorola is hoping to cash in on the nostalgia-driven consumer of 2019. So can they actually compete with the likes of Samsung, Huawei, and any other tech company brave enough to tackle the foldable phone market?

Can the New Razr Compete with Other Folding Phones?

Based on the response of those in attendance at the press event Tuesday night, the Motorola Razr has a real chance it being the first foldable phone to draw some serious consumer attention. In addition to the large, unfolded 6.2 inch display, the folded Razr features a “Quick View display,” which allows users to take selfies (with the Razr's 16 MP camera), check notifications, play music, and use Google Assistant, all without flipping it open.

To make it even more compelling, the new Motorola Razr will cost considerably less than other foldable smartphones on the market. With the Galaxy Fold coming in at nearly $2,000 and the Huawei Mate X all the way at $2,400, the Motorola Razr looks down right affordable in comparison.

Unfortunately, the reality is that the unique foldable device is still going to run you $1,500, which is well above the average price of a smartphone, particularly with affordability becoming one of the more popular selling points in the industry.

Price isn't the only issue for the new Razr  either. The foldable device features a 2,510 mAh battery, which is notably smaller than other flagship devices like the Galaxy S10 or the iPhone 11. Additionally, the new Razr doesn't have wireless charging capabilities, and the TurboPower charging tops out at 15W. Obviously a uniquely nostalgic device like this could overcome a setback like battery life, but Pixel 4 reviews have proven that a great phone can be taken down by a weak battery.

When Is the New Motorola Razr Available?

If you were hoping to get your hands on this beautiful piece of nostalgia before the holidays, we have bad news for you. According to Motorola, the new Razr won't be available until January 2020.

Still, pending any serious delays — which are admittedly all to common when it comes to foldable phones — three months is hardly that long to wait for something that, despite a few leaks, was kept comparatively under wraps. So if you can wait out all the smartphone hype, waiting until the new year might be worth it for a chance to flip open a Razr one more time.