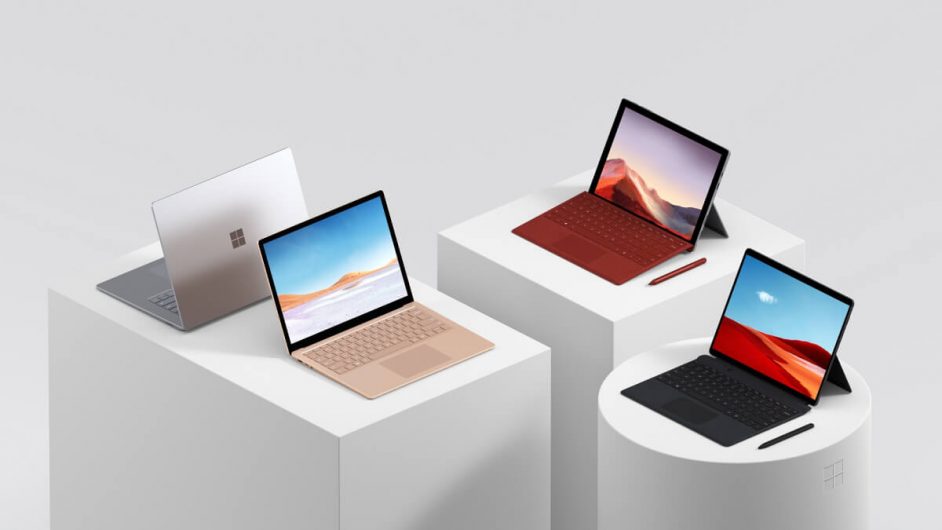 With fall in full swing, some of the world's biggest tech companies have begun announcing some of this year's newest products. And while smartphones have been getting all the attention so far, Microsoft just revealed the new Surface lineup — along with some innovative accessories — and we're pretty excited.

Take a look at everything Microsoft announced at the special event today, and keep your eyes out for some of their more innovative ideas in the coming years. 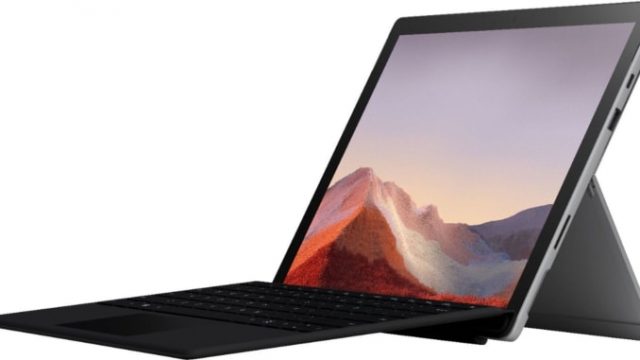 As is tradition, Microsoft announced an updated Surface Pro, that is a minor improvement on the Surface Pro 6. Many have pointed out that, even for a yearly update, the Surface Pro 7 is remarkably similar to the Pro 6, which doesn't give users much motivation to upgrade. However, it does come with a USB-C port, an addition Microsoft users have been asking for, and an updated Surface pen that can add and delete items from documents much more easily.

Another added benefit of the Surface Pro 7 compared to the Surface Pro 6 is that they added a new microphone, dubbed Studio Mics, which will make it easier to take and make calls on the device. This is important, as the Pro 7 can now accept calls from Android devices once you tether them together. 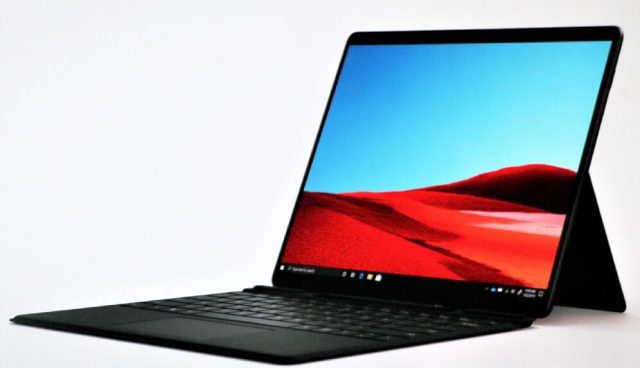 If you were unimpressed by the Surface Pro 7, don't worry. Microsoft really brought out the big guns by announcing the Surface Pro X, a high-powered entry into the Surface lineup. The SQ1 Arm processor will give it “smartphone-like speed,” and the thin design will provide the ultra-mobile feel that the industry has been moving towards.

In addition to all that, they added an updated Surface Slim pen, which comes with a small housing area within the keyboard. The storage area will provide wireless charging for the pen, so you'll never have to worry about whether it's ready to go or not. 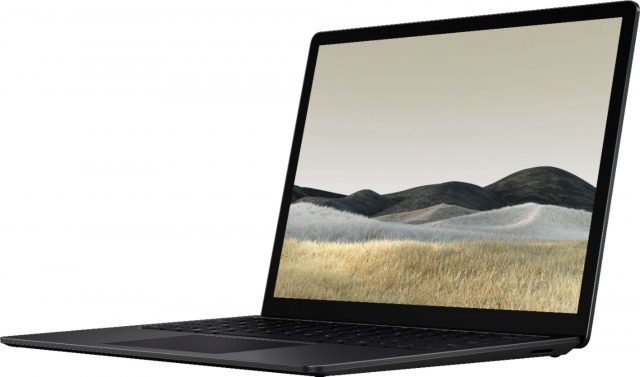 A Microsoft event wouldn't be complete without a mention of the Surface Laptop. Fortunately, diehard Microsoft fans weren't disappointed thanks to the announcement of the Surface Laptop 3. This ultralight laptop comes with USB-C and USB 3.0 ports, runs Windows 10, and has a nearly 12-hour battery life, putting it firmly in competition with other models on the market.

That's not all. The Surface Laptop 3 will be a leap forward in repair-ability, as was demonstrated at the event. You'll be able to easily remove the top of the surface with three simple screws, giving you access to the hardware and an easy avenue to repairs, without having to take it to the store. 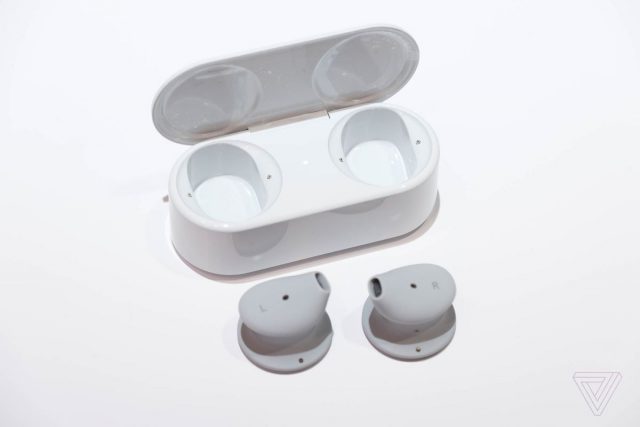 That's right, Microsoft is jumping on the wireless earbud bandwagon with the Surface Earbuds. While they aren't equipped with a virtual assistant, they do have gesture functionality, giving you access to Spotify if you're an Android user. These productivity-minded earbuds can also be used for dictation, navigating through a PowerPoint presentation, and even integrating with Microsoft Office.

Between Google, Amazon, and now Microsoft, the wireless earbud market is getting some steep competition. Granted Apple's AirPods are the standard right now, but with all of these tech companies throwing their hats in the ring, it's safe to say we could be seeing some serious innovations in the coming years. The Microsoft Surface Earbuds will cost $250 and will be available later this year.

In addition to the products announced for release this year, Microsoft spiced things up a bit with a peek into the future of their hardware lineup. And they certainly had a few surprises up their sleeves, particularly when it comes to foldable devices. 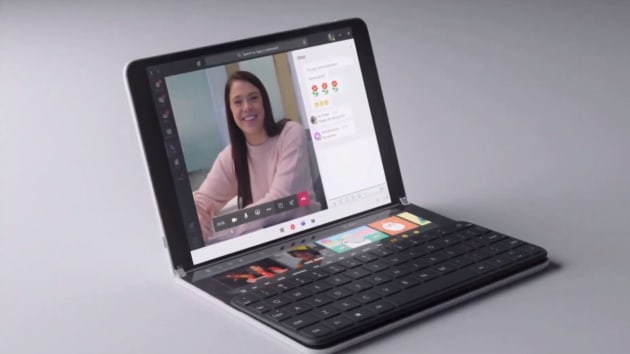 Coming in the holiday season of 2020, the Surface Neo is a dual screen tablet that will fold together for easy transportation. It will run on a future version of Windows, which Panos Panay- the chief product officer for Microsoft’s Devices Group- said will be dubbed Windows 10 X. Despite the notable lack of details, there were a few key features that made heads turn at the event.

For one, the Surface Neo is going to be keyboard compatible. It will attach to the bottom screen magnetically, as shown in the picture, right. When not in use, the keyboard will be able to magnetically attach to the back, along with the Surface pen. What's more, the device will be only 5.6mm thick, thanks mainly to the thinnest LCDs on the market, but will still be sturdy enough to survive a fall thanks to the Gorilla Glass surrounding the device.

Also launching during the 2020 holiday season will be the Surface Duo- a mobile version of the Surface Neo, bringing Microsoft back into the mobile market, since abandoning the Windows phone a few years ago. However, Panay was quick to assure attendees that this is not an upcoming smartphone, and to “make no mistake, this product is a Surface.”

Many beg to differ though. It can make phone calls, it can take pictures, and it's roughly the size of a smartphone, particularly when folded up. The dual screens will work in tandem to provide the best opportunity for productivity, so you can get your work done. Additionally, Microsoft is working with Google to enable the device to run on Android, so you won't have to endure the Windows OS when it comes to this new device.

When Will These New Device Be Available?

Unfortunately, those were the only official release dates that Microsoft announced.

Should You Buy a Microsoft Surface Product?

There's no denying Microsoft has locked down the non-iPad tablet market pretty firmly in recent years, with the Surface range, and this year's batch of products certainly doesn't disappoint. By adding the USB-C to their entire lineup, they've established themselves as a solid contender within the space, and the addition of the Surface Pro X shows that they're willing to offer higher end models, for those willing and able to shell out the big bucks for a high performing tablet.

As far as the Neo and Duo are concerned though, a 2020 release date for a non-foldable screen doesn't seem too ambitious, particularly in an industry rife with innovative ideas of how to pull it off. Granted, they're pitching it from a tablet and productivity perspective, which may save them from the battle of smartphone supremacy.

Still, if you're going to wait until 2020, you might as well wait and see what else the tech industry can come up with by then, like a 5G iPhone.