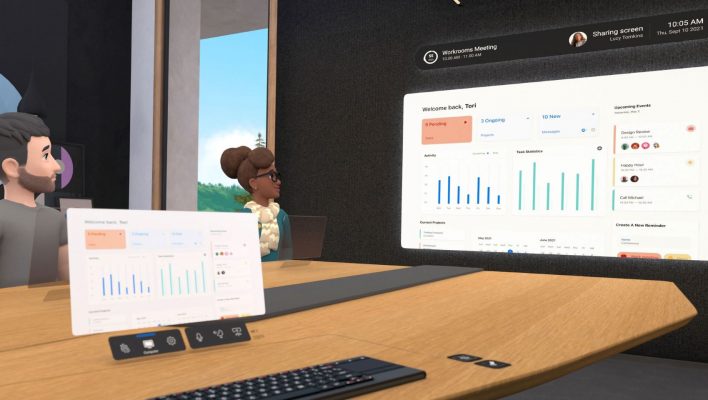 Facebook announced today that it would be launching virtual reality meeting spaces to accompany the pandemic-driven hybrid work trend. But do employees actually want to virtually commute to the office for meetings?

The pandemic has done a lot to change the way we work. From flexible schedules to video meetings, the average work day has become virtually unrecognizable compared to just a few years ago.

Now, with Facebook launching a virtual reality meeting feature, your day-to-day life could get a lot more technological. That is, if anyone is actually on board with the innovative technology.

In a press release Thursday, Facebook announced Horizon Workrooms, an Oculus Quest app that will allow employees and managers to host meetings in virtual reality.

“[Horizon Workrooms] is designed to improve your team’s ability to collaborate, communicate, and connect remotely, through the power of VR — whether that’s getting together to brainstorm or whiteboard an idea, work on a document, hear updates from your team, hang out and socialize, or simply have better conversations that flow more naturally,” said Facebook in the press release.

The functionality actually sounds quite impressive. Users will be able to use their own computers in these virtual reality meeting rooms, utilize a whiteboard that all attendees will be able to see, and even take advantage of multiple room layouts depending on how many employees will attend. For a workforce that is starting to transition to hybrid work, and is likely tired of Zoom meetings, it could make for an interesting and engaging alternative to the video conferencing standard.

The idea is an interesting one, and it's something that Facebook and Mark Zuckerberg have been trying to get off the ground for a long time.

Earlier this summer, Mark Zuckerberg put forth an innovative goal for Facebook. In an internal memo, the controversial CEO stated that he wanted the social media giant to become more than just a set of interconnected apps and services; he wanted to create a metaverse.

“What I think is most interesting is how these themes will come together into a bigger idea,” said Zuckerberg. “Our overarching goal across all of these initiatives is to help bring the metaverse to life.”

If you're getting sci-fi vibes, you aren't the only one. The term — coined in a 1992 sci-fi novel titled Snow Crash — refers to a shared online space that consists of virtual, augmented, and physical reality components. A more recent example would be the OASIS in the popular novel and film Ready Player One.

Put into a business context, this means that Facebook and its ambitious CEO hope to take its many properties– like Instagram, Oculus, and WhatsApp, among others — to create a massive, interconnected experience that sees work, play, and social interactions combined into one hub.

Simply put, Zuckerberg is trying to put the whole world online. But is that what people actually want?

Is Virtual Reality the Future of Work?

Zuckerberg would be the first to admit that a full-on metaverse is a “down the road” kind of plan. However, virtual reality meetings are certainly a step in that direction, and the question remains: does anyone actually want this?

Given the decidedly meek impact of virtual reality since its inception, our guess is a firm no. The reality is that, while VR has improved greatly over the last few years, it hasn't gained anything resembling mass appeal at all. To make matters worse, experts still recommend playing for only 30 minutes at a time to avoid losing spatial awareness, and headsets remain uncomfortable burdens on users, even while playing the most entertaining games out there.

Now translate that into a work environment. Yes, virtual reality meetings would be a fun departure from Zoom meetings for a brief time. Unfortunately, before long, the novelty would quickly wear off, and your employees would be left to endure the facial rashes, eye strain, and general discomfort of VR for a meeting that will most likely last longer than 30 minutes.

Sure, VR could be the future of work, but it's a much more distant future than Zuckerberg would like to admit. So for the time being, we'll borrow a phrase from the incomparable Regina George: “Stop trying to make VR happen, Mark! It's not going to happen!”