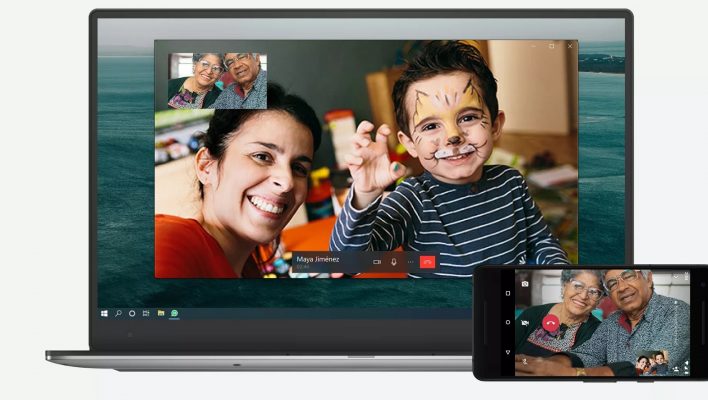 WhatsApp, the Facebook-owned messaging service, has fielded billions of voice and video calls — sometimes within the same day, like their record-breaking 1.4 billion calls last New Year's Eve. But those calls all had one thing in common: They were only available on mobile. Now, WhatsApp is bringing the functionality to desktop.

The service is starting by making just one-to-one voice and video calls available through the WhatsApp desktop app, and will be rolling out group calls on desktop at a later unspecified date.

When using your desktop for free video calls with your contacts, WhatsApp will appear in a “resizable standalone window,” which sounds similar to services like Zoom.

Interestingly, both portrait and landscape orientation will be supported. Also, the WhatsApp video window will default to always appearing on top of your other windows and browser tabs.

In the announcement, WhatsApp alluded to the coronavirus pandemic's effects pushing its users towards more desktop use:

“With so many people still apart from their loved ones, and adjusting to new ways of working, we want conversations on WhatsApp to feel as close to in-person as possible, regardless of where you are in the world or the tech you’re using,” WhatsApp said in their blog post. “Answering on a bigger screen makes it easier to work with colleagues, see your family more clearly on a bigger canvas, or free up your hands to move around a room while talking.”

Desktop calling is supported on Windows 10 64-bit version 1903 and newer, as well as macOS 10.13 and newer. All calls will be end-to-end encrypted.

With this new feature, WhatsApp is jumping into the crowded video conferencing desktop software space, joining Zoom, Google Meet, Microsoft Teams, and many more. And as with many new Facebook-backed initiatives, the social media giant's sheer size will automatically make it a player worth keeping an eye on from day one.

If WhatsApp plans to fully expand into desktop in addition to mobile, we might see more changes in the future as well. I'm just speculating here, but currently the messaging app requires all users to sign up with cell number, something that further ties WhatsApp to its origins as a pure mobile app.

Whatever the case, the news is another sign that video conferencing is here to stay. The concept of livestreaming events and turning get-togethers into Zoom parties went mainstream in 2020, and even once the pandemic is behind us, video meetings will remain bigger than they were before.

But until WhatsApp debuts a “WhatsApp Team” feature, these top ten services will still be a business's best option for smooth and clear video meetings: