Get Project Management Software Quotes What type of project management software do you need?
Small Team
Large Business
Tailor-made software costs for your business
Home Project Management Software
A newcomer to the industry with helpful built-in tools
In Short
If you were to ask ClickUp what it brings to project management that other software providers don't, it would be hierarchy. How you organize your material is a key part of any workflow, and to hear ClickUp tell it, competitors like Mavenlink just aren't up to the task.  That's why it’s created a hierarchy that is meant to be more flexible and better organized.
30 Second Facts
First Look Click to expand 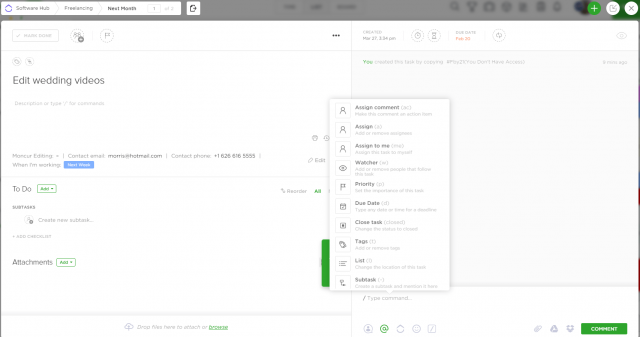 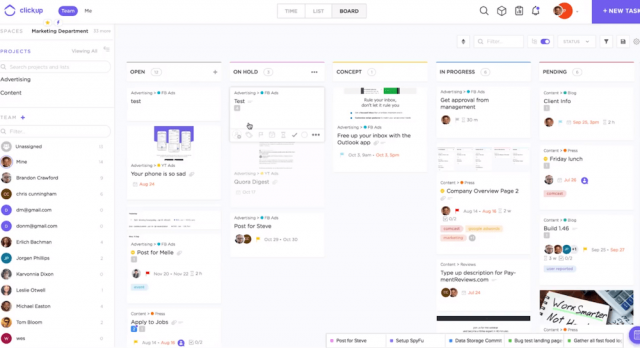 San Francisco-based ClickUp entered the world of project management software in 2016. The company came into being as a result of dissatisfaction with other project management tools, which either offered too much or too little. ClickUp sees its product as right in the middle, between software that is too complex and others that are too simple.

It offers a good range of customizable options, and a lot of its key features are available in the free version. That's a key distinction, since other service providers hide basic features such as task dependencies behind higher payment tiers. This in turn forces users to pay for the more expensive versions to get a fully usable product.

That's not to say ClickUp isn't without its problems. Even in what it sees as striking a balance between simplicity and complexity, there may still be too much of the latter for some users' tastes.

As we previously mentioned, ClickUp offers a good amount of features in its lower pricing tiers. Essentially, you get everything you need to get work done, for free. As you go up in pricing tiers, ClickUp then adds features that are key for heavy individual users, small- to medium-sized businesses, and enterprises. For example, going up to the first payment tier – dubbed Unlimited – will remove the storage limits ClickUp includes on its free version, and make it easier to use third-party integrations.

One thing that ClickUp lacks is a wide number of third-party integrations. It does have some key ones, such as Dropbox, Google Calendar, Slack, and Outlook 365. But anything beyond that, such as Salesforce, requires the use of Zapier, which itself is a third-party service that connects web apps to other web apps.

At the top are Teams, which ClickUp sees as just your company. That means you only need one Team per organization. You can create more teams than that if you prefer, but in ClickUp's view, it's better to start with just one.

Spaces are your company's different departments, such as marketing, sales, and administration. Client-based businesses, such as public relations firms, could also create a Space for each client.

Next up, Projects are just that – Lists, however, are a little more nebulous. Lists are there for people who want to create sub-projects within their larger projects, such as certain milestones, or to create specific marketing pushes. If HBO were a ClickUp customer, it might make a Game Of Thrones season eight project, and then have “pre-season marketing” as a list within that project.

Finally, you have Tasks, which are your everyday to-dos.

ClickUp lets users take actions on several tasks at once with its multi-task toolbar. It isn't all that different from what email programs do when you want to, say, mark all the messages in your inbox as read.

Once you select multiple tasks, the toolbar appears at the top of the screen, with options to set assignees, status, tags, due dates, convert to sub-tasks, set dependencies, and so on. It's a helpful tool when managing large numbers of tasks.

ClickUp is highly configurable, with a number of tools that advanced users will appreciate. It offers keyboard shortcuts for actions such as setting a due date within a task, or assigning a person responsible. There are also numerous filters you can use to view tasks within a project, based on attributes such as assignee, due date, and tags. These filters can also be saved, allowing you to customize your views. If you dedicate specific days to a single client, for example, and need to see the most urgent tasks for that client at any given time, a saved filter can help you do that.

Check out some of ClickUp's key rivals, below, or see our guide to the best project management software:

This video from ClickUp offers a high level view of the company's product, including a basic tour of the interface, how to create tasks, and a look at custom statuses.

The most basic version of ClickUp starts at its free tier, and is surprisingly useful. With the Free version, you get the ability to create unlimited projects and spaces, add unlimited users, and use all the key features for tasks such as dependencies. It does limit certain features such as goal-setting and custom field creation. The free tier also limits storage at 100MB total.

The next tier up is the Unlimited plan, which charges $60 per user, per year, or you can pay month-to-month at $9 per user. For that money, you get unlimited everything, including storage, integrations, features, and advanced reporting. On top of that, you can set permissions to restrict users from accessing certain data.

The Business plan charges $108 per user, per year, or $19 per user on a month-to-month basis. You get all the features in the Unlimited tier, as well as security features such as two-factor authentication and the ability to sign-in to ClickUp with a Google account. The company also plans to add advanced data exporting and goal alignment in the future.

Finally, there's the Enterprise plan for $204 per user, per year, or $29 per user, per month. This adds all the Business features, plus the ability to sign-in with accounts from multiple providers, not just Google. It also supplies increased API limits for any internal customizations, contract and legal review for a customized ClickUp agreement, and HIPAA compliance.

All of these tiers can be signed up for automatically, with the exception of Enterprise.

ClickUp is a great choice for independent workers and small teams, and offers enough key features for enterprises, too. The power user tools may also attract users who are looking to enhance productivity.

The pricing is also very competitive. Many other companies will charge $9 per user, per month or more just for the basic features that ClickUp gives away for free. The hard storage limits on the free tier may push some to go up to the Unlimited plan, but that's still a better deal than being forced to pay more just to get basic features.

ClickUp may be a relatively new company, but it offers a solid product that is well worth a look.

Tech.co is reader-supported. By clicking to compare, you’ll receive quotes from various suppliers, tailored to the needs of your business. If you enter into a contract with a provider, we may receive a payment for the introduction. This helps Tech.co to provide free advice and reviews. It carries no additional cost to you, and doesn’t affect our editorial independence.

Ian is an independent writer based in Israel who has worked as a technology industry reporter and critic for more than ten years. He’s written for PCWorld, Macworld, TechHive, Yahoo, Lifewire, and The Huffington Post. He primarily covers Windows, PC and gaming hardware, video and music streaming services, security software, and browsers.

close Looking for Project Management Software? Try one of our top-rated tools: Try Monday.com
We use cookies. By browsing our site you agree to our use of cookies.