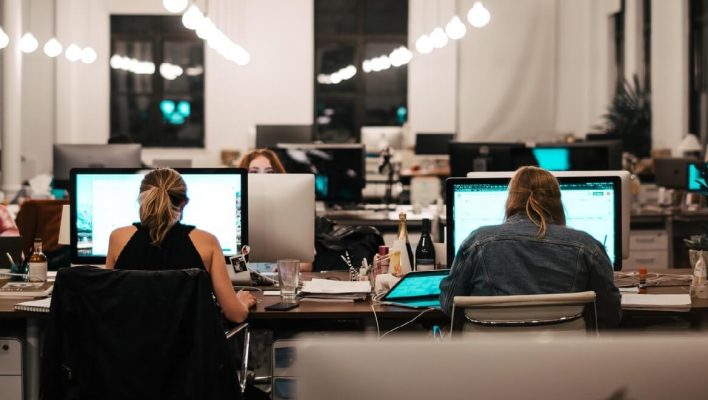 We've officially moved past the first anniversary of the global pandemic, and with the worldwide rollout of vaccines in full force, many tech companies are beginning to return to the office.

However, the office of 2021 is likely to look much different to the ones that were left behind at the start of last year, with many companies not returning at full capacity, and others allowing a more flexible working from home policy going forward.

For some though, the aim seems to be a return to the 5 days a week, 9 to 5 approach as soon as possible. So, what will the tech industry workplace look like in the coming months?

Initial Responses to the Pandemic

When the pandemic forced many offices to close their doors and send employees home, it is perhaps no surprise that some adjusted faster than others. Many tech firms, used to working with remote technology, seemed to embrace it, and it wasn't long before companies such as Twitter and Facebook told its staff that they were free to work from home indefinitely.

Some responses from employees to the Coronavirus have been better than others. Elon Musk had a somewhat dismissive approach to the impending pandemic last year, telling employees that “Coronavirus panic” was worse than the pandemic itself. Musk reopened Tesla's Fremont, California plant in May 2020, against local restrictions, daring authorities to arrest him. In the months that followed, more than 400 COVID-19 cases were confirmed at the factory.

Musk also initially told Tesla employees that it was “totally ok” to stay at home if they felt unsafe, but the company later informed staff they would be fired if they didn't return.

Facebook was one of the first companies to loosen the reigns on its workers and state that going forward, there would be more opportunity to work from home. However, it is now looking to start opening its Silicon Valley offices in May. At first, progress will be cautious – occupancy will be just 10%, with attendance not expected to reach 50% until September at the earliest.

Mark Zuckerberg has admitted that he expects around 50% of the Facebook workforce to work remotely in the next decade, although those that move out of the pricey Silicon Valley area will also likely see employees' wages reduced to reflect their cost of living changes.

When Facebook employees return to the office, the company will mandate social distancing, masks and weekly COVID-19 tests.

Amazon Wants Staff Back as Soon as Possible

While some firms are happy to give their workers some freedom as to where they choose to work from, Amazon have taken a different tack. It's perhaps not surprising that a company which monitors its employees toilet breaks wants them out of their homes and back under watchful eyes in the office, as soon as possible.

The company has announced that it plans to get back to the office through the summer, with most staff back by the fall. Amazon states that currently its offices are at 10% occupancy, and it's looking to increase that number as soon as possible.

Given its global reach, these plans depend on the territory of its offices. For example, Amazon states that in many Asian territories, staff have already returned to the office. For the US, it seems that progress will be tied to vaccines, and in Europe, Amazon admits that the progress will be slower due to a current third wave of the virus.

Our plan is to return to an office-centric culture as our baseline. We believe it enables us to invent, collaborate, and learn together most effectively. – Amazon communication to its staff

Microsoft is Letting Staff Choose Where to Work

Microsoft has been one of the more progressive firms when it comes to flexible working, fully embracing the ‘hybrid' model of office/home work for those that want to do it. In a blog post that outlines its return to work plans in forensic detail, the company has stated that it wants to ‘showcase to the world that the modern workplace is both flexible and hybrid'.

An increased number of staff actually returned to its headquarters in Redmond, Washington this week, with the company stating that it envisions staff working from home less than half the time (depending on the office location). However, it's not likely we'll see a huge rush back to the Microsoft offices –  current regulations in Washington have just been increased from 25% to 50% occupancy for indoor spaces, so there still won't be enough room for everyone.

According to an internal survey from Microsoft, in those territories where offices have reopened, staff are choosing to spend less than 25% of their time in the office.

Google is allowing some of its US employees to return to the office from April. This is on a voluntary basis – nobody has to go back in if they don't want to, and currently the company plans to allow its workers to continue to work from home until September, if they prefer.

According to an internal memo from Google, those who want to carry on working from home from September, for more than 14 days of the year, will need to apply for it, and have their request considered on a case by case basis. Applications can be made for up to 12 months, although Google has the right to request staff return to the office at any point.

Expectations from Google staff, that the company might allow the option of working from home indefinitely, were somewhat quashed in December, when the company told staff that they were expected to live within a commutable distance of their office.

While we're seeing some tech firms opening up their doors again and blowing the cobwebs off their coffee machines, others are embracing the working from home lifestyle, long term. Twitter is one such example, telling staff almost a year ago that they were free to continue to work from home forever.

If our employees are in a role and situation that enables them to work from home and they want to continue to do so forever, we will make that happen. – Jack Dorsey, Twitter CEO

Staff at Square were told the same thing in May, although that's perhaps not too surprising considering that Jack Dorsey happens to own that company too.

It seems that May was the time to learn you could work from home, as another big tech firm, Shopify, also told its employees the same news that month, with the CEO claiming that digital working would become the new normal.

As of today, Shopify is a digital by default company. We will keep our offices closed until 2021 so that we can rework them for this new reality. And after that, most will permanently work remotely. Office centricity is over. – Tobi Lutke, Shopify CEO

Then in June of last year, Slack told its staff that not only would they be given the option to work from home permanently, the company would also focus on new hires who were permanently remote.

Most employees will have the option to work remotely on a permanent basis if they choose, and we will begin to increasingly hire employees who are permanently remote. – Robby Kwok – Slack SVP of People

Tech's Role in the New Way of Working

It's hard to imagine the impact the pandemic would have had on a less tech-savvy workforce. While the move out of the office and into employees homes has been challenging, there have been a wide array of modern tools at our disposal which have considerably smoothed the transition.

One of the biggest of these is undoubtedly web conferencing software. If you've had a meeting recently, chances are its been via a platform such as Zoom, Google Meet or Microsoft Teams. While these aren't a one-to-one substitute for an actual in-person meeting, they're as close as you're going to get, and the industry has exploded over the last year. Zoom has found itself becoming THE word for video conferencing, in the same way that Hoover is synonymous with vacuum cleaning in the UK. It's also made a cool $1 billion dollars last year – not bad for a company nobody had really heard of just over a year ago.

Find out which web conferencing app is best for your business

Then there are other tools that allow for collaboration, no matter where your team is working from. Project management platforms such as monday.com mean that employees can share ideas, update workflows and continue to be creative, synchronously, regardless of there they are.

However, there's also the security concerns of working outside the office. It's much easier to provide a secure environment when everyone is under one roof. With staff working from home, teams are more disparate, and valuable company data is being shared across multiple networks. We've already seen examples of hackers taking advantage of weaknesses in home working, with some reports an increase of 4,000 hacks per day in the pandemic.

Tools such as a VPNs, which mask your employees' identities, and with it, your valuable company data, have seen a massive uplift in use during the last year, as companies balance flexibility with security.

The approach to returning to work from the tech industry has been relatively varied, but one certainty is that moving forward, the physical office will never be the same again, and many of the methods of working we've adopted over the last year will be here to stay.