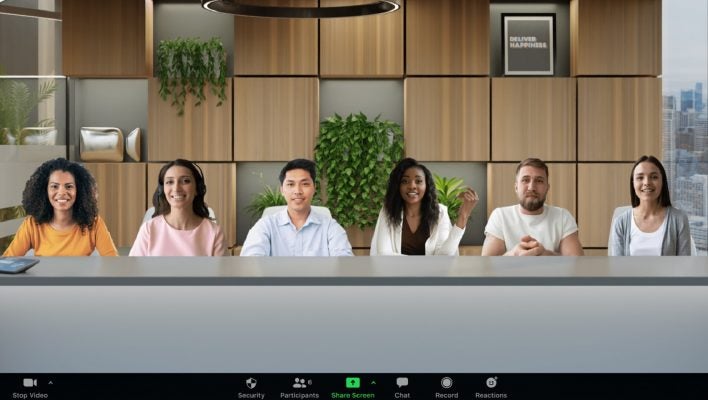 If you feel like your video calls are getting stale, then good news — Zoom has announced ‘Immersive View', a way for you make conference calls seem a little more involved.

The new view removes participants from their usual Brady Bunch-style boxes, instead placing them in a virtual environment, meaning that if you sit next to each other in the office, you can now do so on screen.

The tech has been previously been employed by other web conferencing solutions, such as Microsoft Teams.

So, what should you look out for?

There's no question that working from home, as many office workers globally have found themselves doing this past year, can be an insular experience. Video calls go some way to bridge the gap, but even then, it's no substitute for sitting in an office with colleagues. Until we get full VR-enabled video conferencing (and trust us, it's being worked on), the next best thing might just be Zoom's new Immersive View.

The new view allows team meetings to break free of their boundaries, and appear in a virtual environment onscreen, instead. This could mean that your team is sitting behind desks, or if you're feeling a bit more creative, as pictures hung in a gallery. The idea is, according to Zoom, to encourage collaboration.

“Immersive View allows hosts to arrange video participants and webinar panelists into a single virtual background, bringing people together into one scene to connect and collaborate in a cohesive virtual meeting space.” – Zoom

Hosts are even able to move participants around at will, like dolls in a diorama. Don't want to sit next to Ted from Accounting, even if it is virtually? No problem.

Immersive View has a few default options, but you can also add your own. Hosts could use an image of their old meeting room if they're feeling nostalgic, or hold an online meeting against the backdrop of their favorite bar, at the top of Niagara Falls.

Want to know how Zoom stacks up against Microsoft Teams? Read our versus guide.

Zoom's Immersive View is available for Windows and MacOS desktop clients, and enabled by default for Free and Pro accounts on Zoom 5.6.3 or higher. It can also be enabled on other account types and via the web portal. Zoom has included detailed instructions on its site.

If someone in your group is using an older version of Zoom, they'll see the traditional gallery view, but those in the group with the update will see them in the Immersive View.

There are a few limitations to this new view at the moment. It's not available in the breakout rooms, and recorded meetings using it will playback as the default view. It also only supports 25 attendees – any more than this will be displayed in a thumbnail strip at the top of the screen.

There's no doubt that the pandemic year has been kind to Zoom. The company made a profit of nearly $1 billion in 2020, compared to ‘just' $100 million the previous year.

The rise of Zoom as a relative unknown, and the sudden reliance on video conferencing services, has served as a fire under the industry, which is now fighting tooth and nail for this audience of millions of new customers worldwide. Even when offices reopen, flexible work looks like it could be here to stay in some form, and people will still need to talk to their colleagues daily.

This is why Zoom, as seen here, is constantly evolving and improving its product. They may be top dog at the moment, but with plenty of big names closing in behind them, they can't afford to stand still. Microsoft Teams is a great example of an ever evolving video conferencing solution, with constant updates. In fact, Teams beat Zoom to the punch on this occasion, with its own take on Immersive View, Together Mode, rolled out last year.

Then there are other providers, such as Google Meet and RingCentral, whose new Glip platform offers free video calling for 24 hour periods, all looking to convince you that it's their platform you should be using. If you've been left confused, check our our guide to the ten best video conferencing services of 2021.