Smartsheet doesn’t offer a free tier, with prices starting at $14 per month. We’ll break down the various tiers of Smartsheet's service as best we can, although annoyingly, the company doesn't publish its prices for the tiers that best suit mid- to large sized companies. Nevertheless, we've taken a look at the additional features Smartsheet offers within these tiers, to help get a sense of what the company can do for you.

Smartsheet doesn't offer a free tier. Pricing instead starts at $14 per month and increases from there. We'll break down all the various tiers in this service, as best we can. Smartsheet doesn't publish its prices for tiers that best serve mid- to large-size companies. Nevertheless, we can look at the additional features the company offers within these tiers to get a sense of what the company offers.

Smartsheet offers four different pricing plans, but only two of them have public pricing. These four tiers exist under two different categories: Standard, which is made up of the Individual and Business plans, and Enterprise, which features the Enterprise and Premier plans.

When it comes to selecting the ideal tier for your business, Smartsheet's pricing and features are pretty self-explanatory.

Freelancers and other solo workers should opt for the Individual plan. This comes with the basic features of Smartsheet, and allows users to bring in collaborators when necessary at no extra cost.

The Business plan is ideal for companies with at least three members of staff, and for those who don't need enterprise-grade features such as single sign-on or deeper administrative control.

Those who do need single sign-on can sign up for Enterprise, while Premier adds higher level support and key integrations with popular business software.

Check out some of Smartsheet's key rivals, below, or see our guide to the best project management software:

While we can't tell you the pricing for Smartsheet’s Enterprise tier, it's worth keeping in mind that there may be some discounts to be had after negotiations with the company.

Smartsheet Individual costs $14 per month for a single user paid annually, or $19 on a month-to-month basis. For that money, you get the ability to create 10 different sheets (essentially projects), which might be limiting for some. You are limited to one dashboard for an overview of all your projects, and up to five different reports on your sheets.

With sheets, you can carry out the basics of project management, such as task creation and setting milestones. Support is available via email.

The Individual plan also supports Gantt charts, forms, mobile access, and automated workflows. It limits collaborators to 10 per item, which is better than just a flat 10 if you need to incorporate multiple people across multiple projects. Some of the features you don't get aren't all that necessary for a single user, such as the activity log, single sign-on, access control, or live data connector.

Overall, Smartsheet is a pretty good deal for individual workers. In some ways, it even beats free tiers of competing products, since it doesn't hide key project management basics behind its upper pricing tiers. 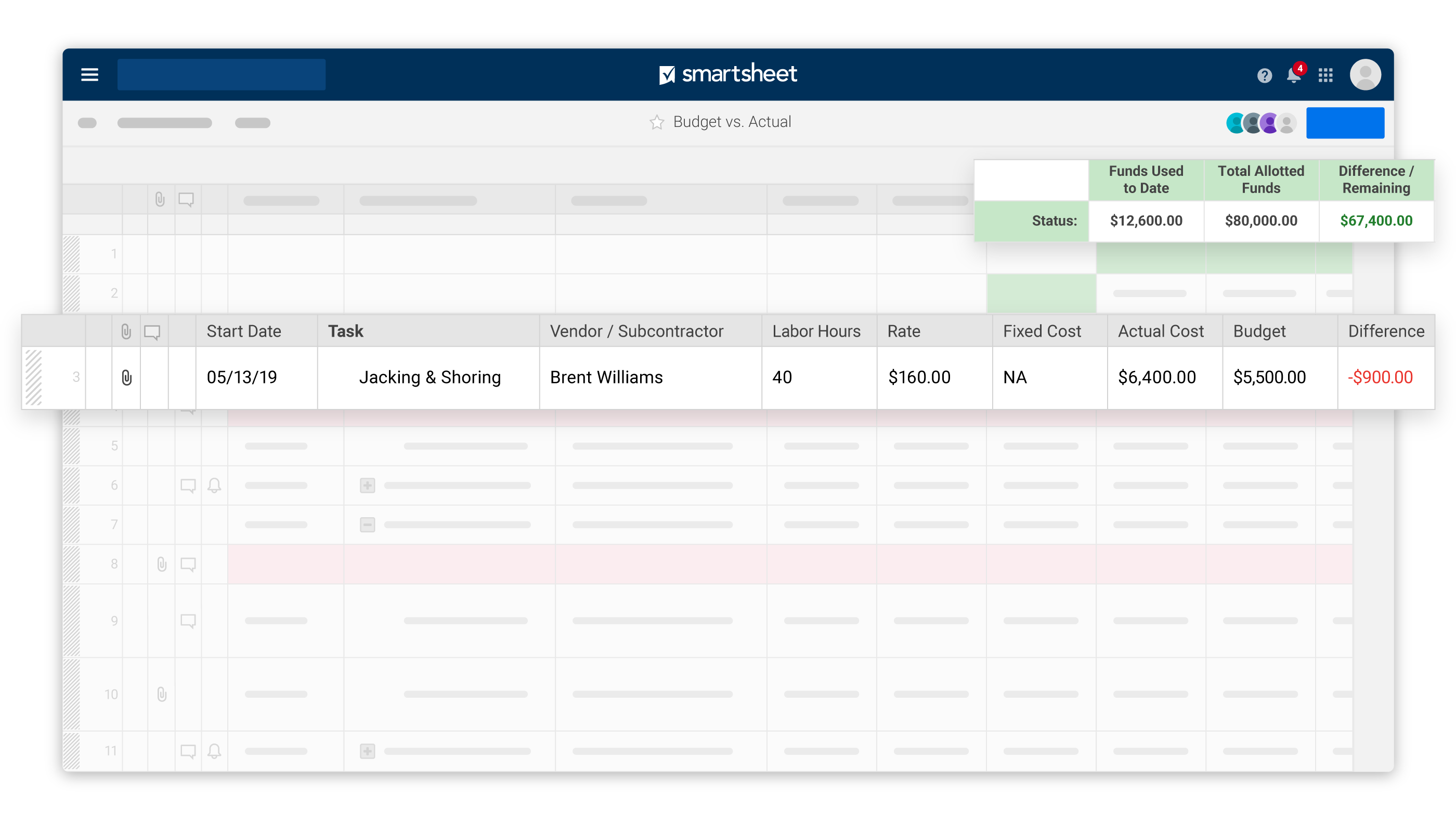 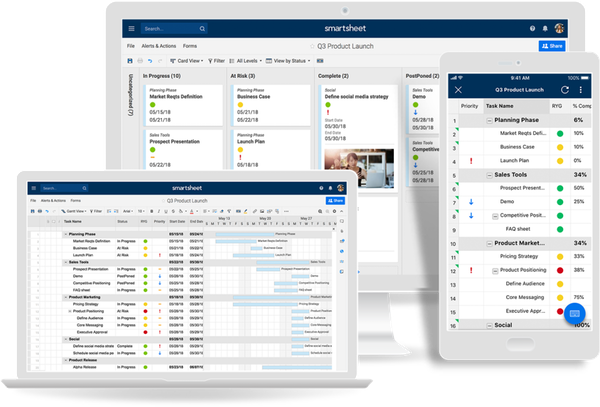 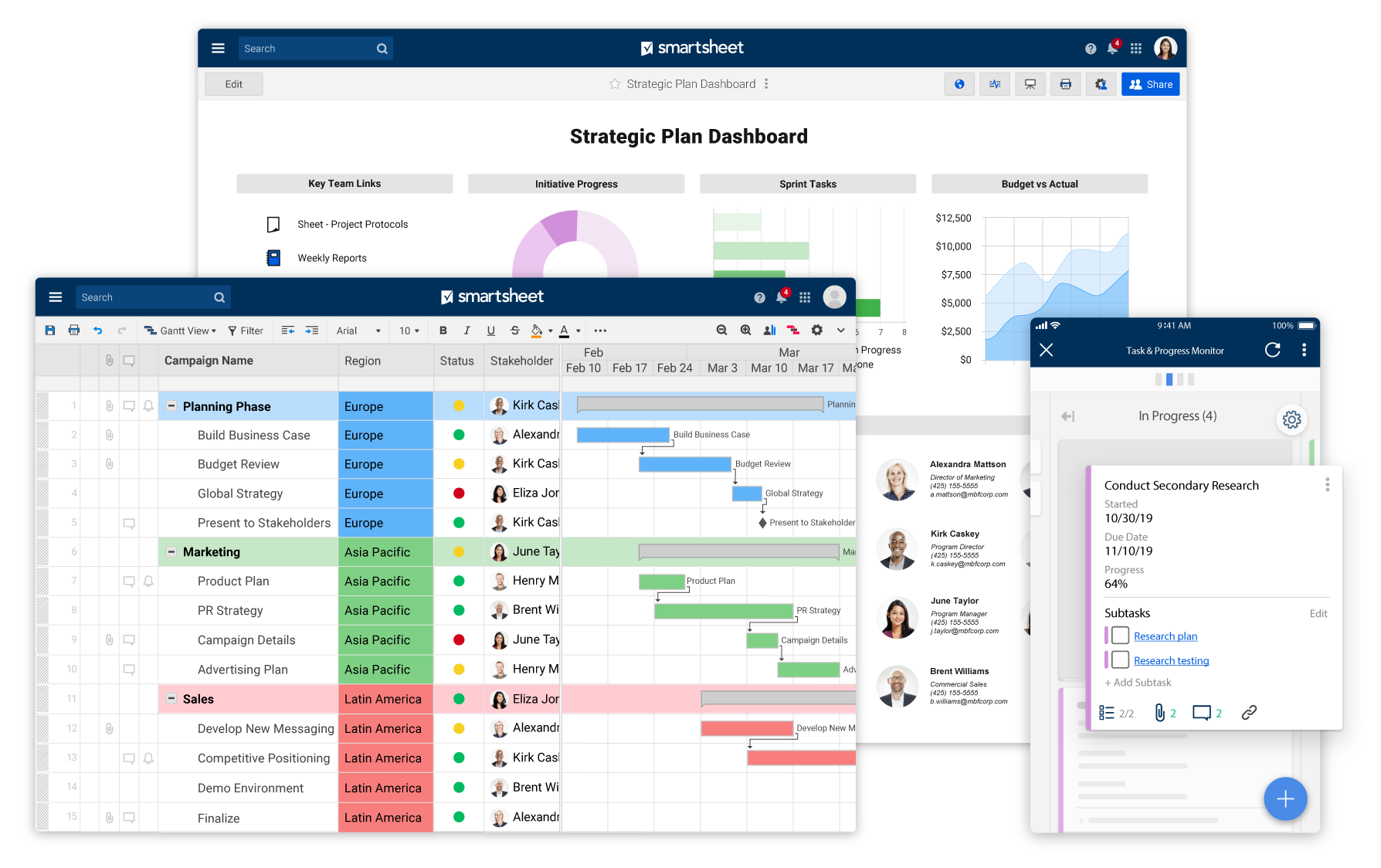 Once you get up to three people, it's time to upgrade to Smartsheet Business. This tier costs $25 per user paid annually, or $32 per user on a month-to-month basis. While Business requires a minimum of three users and unlimited collaborators, it also limits the number of sheets to 100 per user. You do get unlimited dashboards and reports, but as with the Individual tier, support is limited to email.

Just like Individual, the Business tier supports card view, Gantt charts, forms, mobile access, reminders and notifications, and automated workflows. Business then adds features that are necessary for teams, such as an activity log. It also adds the ability to manage groups and resources, control sheet ownership, as work with custom branding. There's also a live data connector for connecting smartsheet data to analytics programs such as Tableau, Excel, Qlik, and Spotfire. You can also add Jira and Salesforce connectors for an additional cost.

This tier is ideal for small and mid-sized teams, but it lacks features larger organizations want, such as single sign-on and more control for system administrators.

The tiers for enterprises lack any public pricing, since Smartsheet negotiates these costs on a case-by-case basis. Enterprise offers unlimited everything, including collaborators, sheets, dashboards, and reports. Support is also upgraded to telephone instead of email.

As with the Business tier, Enterprise supports single sign-on, but adds what Smartsheet calls “enterprise access control”. This allows users to whitelist domains that users can share to, control publication features, blacklist specific filetype attachments, create welcome screens, and automatically add users to Smartsheet from designated company email domains. There's also an option to add Jira and Salesforce connectors at an extra cost, as with the Business tier.

If that's not enough, there's the Premier tier, which takes everything Enterprise offers and adds other key items that enterprises may need. These include premium support, additional app integrations such as DataMesh, Dynamic View, and Pivot, and application connectors such as Jira, Salesforce, and Microsoft Dynamics. Like Enterprise, Premier pricing is only available directly from Smartsheet.

Verdict: Should You Pay For Smartsheet?

Unlike many other project management services, Smartsheet doesn't hide the basics you need for managing your projects behind its upper tiers. Instead, it charges for additional business features as the size of the company demands.

Without a quote to hand, we can't make a judgement call on whether the enterprise tiers are worth it. The two lower tiers, however, are definitely good value if the Smartsheet approach to project management is what you're looking for. For those who are unsure, the best way to find out is to use the company's 30-day free trial.

close Looking for Project Management Software? Try monday.com – one of our best rated project management tools monday.com
We use cookies. By browsing our site you agree to our use of cookies.